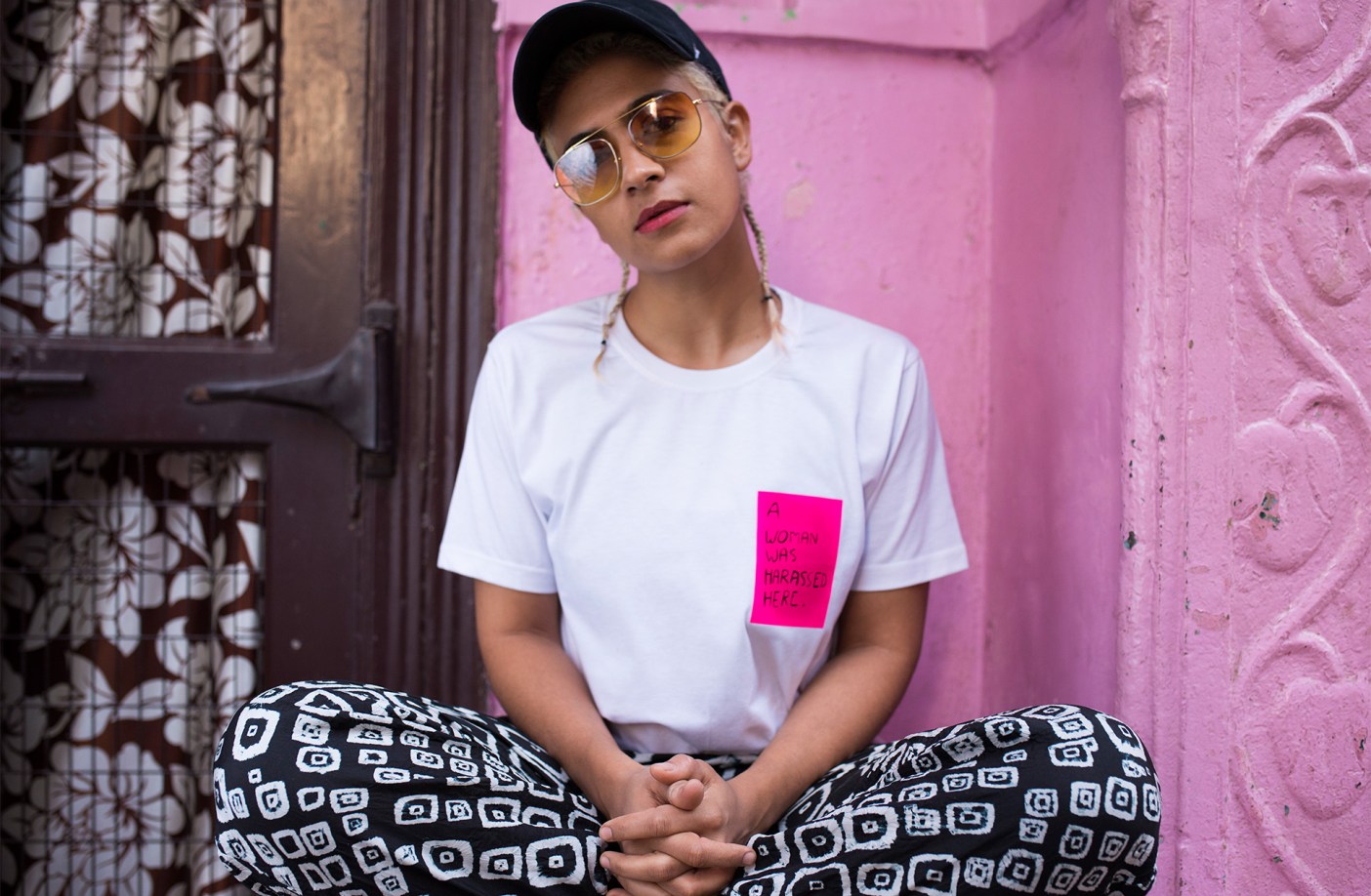 By Brianna West for Teen Vogue

“A lot of people think they have to wait until much later in life to give back, but what I’ve learned from my Indian upbringing is that it’s about your sphere of influence.” Kiran Gandhi, known to fans as Madame Gandhi, certainly heeds her own advice. “Maybe you encourage your coworkers to volunteer on skid row, or you go vegan and show your friends that eating ethically isn’t so hard after all. If we could all do this, the world we be such a better place.”

This holistic, on-the-ground approach is how Kiran conducts her own work. The former drummer for M.I.A., musician, actress and Harvard graduate is preparing for a six-city tour in India next month, and she’s enlisted the help of local talent and brands she believes in. Kiran is partnering with the female-lead Indian clothing brand NorBlack NorWhite, and they are altogether collaborating for a campaign which aims to bring awareness to sexual assault, particularly for women in India.

“Often there are no safe spaces for women to report these crimes to, thus perpetuating the problem. I like this aspect of the campaign because it identifies the multi-faceted nature of the rape crisis in India, and also serves to educate governments about the crisis globally, as this issue is usually not only the case in India,” Kiran explains. “A Woman Was Harassed Here” began as a street art project pioneered by Aqui Thami, who runs the Dharavi Art Room in Mumbai. She started marking city walls with the titular phrase to integrate discourse on harassment by emphasizing how commonplace it really is. The Art Room is located in one of Asia’s largest slums, and attempts to create a safe space for women and children to express themselves and have their voices heard. The merchandise being sold with the phrase “A Woman Was Harassed Here” printed on it will benefit the Dharavi Art Room.

As these issues are so deeply entwined with our cultural and social perception of female sexuality, Kiran argues that the way we speak about women and sex needs to change first. “India has a severe rape crisis right now. I want to make it more sex positive,” she said, clarifying that despite the severity of one country’s problem, the issue is global. “When we talk about sex and female sexuality it’s always about tragedy. It’s always catcalling and sexual harassment it’s never about learning how to orgasm or seek pleasure no matter what partner your gender is. That’s what I want to see more of.”

Back in 2015, Kiran garnered some media attention for running in the London Marathon while free-bleeding during menstruation. She reflects on that now and says the criticisms shed light on more deeply complex ways of thinking. “Other women said things to me like, what is this woman of privilege trying to prove? She’s not suffering. You actually can’t help where you’re born, but you can help what you do what you do with any privilege you are dealt. It is a privilege to be on stage, but I am directing that traffic and that attention to something that matters. I took my joy, playing drums and wearing dope local fashion and chose to [channel it for good],” she explained.

Though she’s clear that you don’t have to have a lot of money to create social change, she does advocate for being mindful of how we all “vote with our dollars,” and that holding people accountable is absolutely pertinent. “If perpetrators saw that there were consequences, real consequences, things would change,” she says, referencing current events in the media.

Kiran returns to India with a sense of purpose, one that she wants to share. There’s a warmth in her voice when she describes how proud she is that her grandparents will get to see her perform. “It’s special,” she concludes. “Really special.”