From actors to entrepreneurs, writers and designers, these women are inspiring people around the world with their empowering stories

Documenting the lives of cocoa farmers in South America; fighting for the rights of restaurant workers; creating binge-worthy television shows that capture the zeitgeist; bringing together people and celebrating the art of gathering; teaching 90,000 girls how to code—these are just a few of the day jobs of Indian women across the globe. Ahead, we bring to you 49 of the brightest actors, entrepreneurs, writers and designers who are creating powerful legacies. These are their incredible stories. 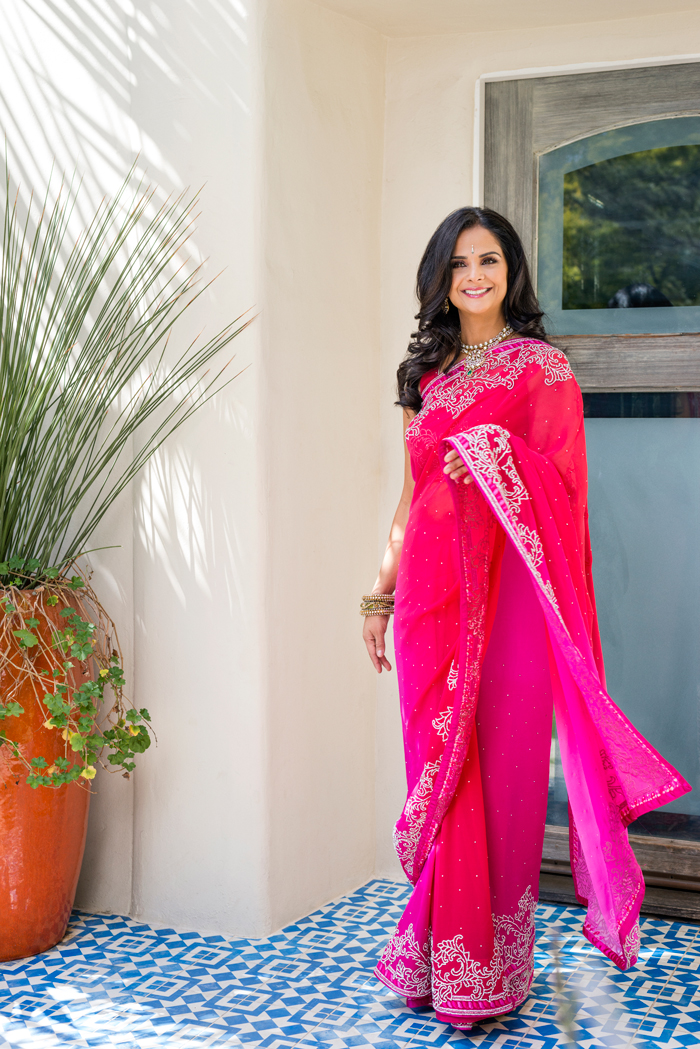 How many people can list a career highlight as “advocating for Mindy Kaling’s first TV show The Mindy Project, where she was the creator, producer and star?” As the highest ranking Indian American in Hollywood, Netflix’s Bela Bajaria is probably the only one. Chances are, if there’s been a binge-worthy television show, she and her team have been involved. In her career she’s overseen shows like Master Of None, Unbreakable Kimmy Schmidt, The Sinner, Riverdale and My Next Guest Needs No Introduction with David Letterman, to name a few. While at Universal Television, Bajaria was offered this role that sits at the intersection of Hollywood and technology. “Ted Sarandos, Netflix’s chief content officer, is creative, a big fan of film and TV, and very strategic, so when he pitched me this unique job to launch the unscripted initiative and major studios co-licensing, I took it.” She adds, “My Indian roots are also a strength and asset in storytelling. I love bringing my Indian background into work, whether that is in a show or introducing Indian food to my teams or wearing a sari to the Emmys and Golden Globes. The upbringing of community and warmth is an asset in managing teams at work, too.”—Priyanka Khanna 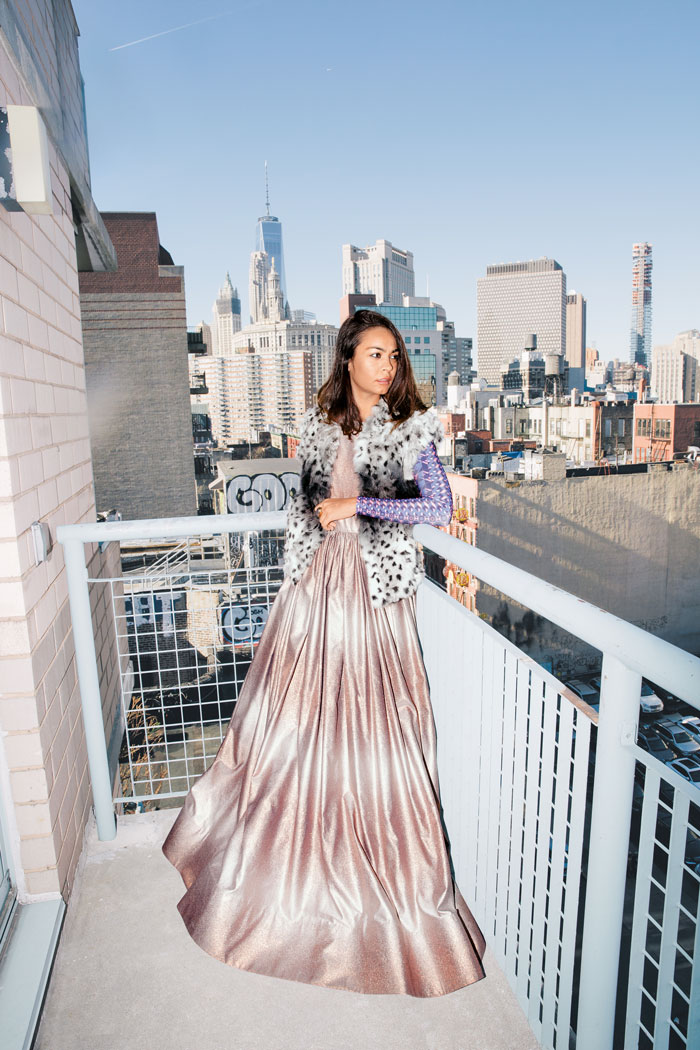 “Indian Annie Hall meets Katharine Hepburn—collared shirts with pyjama pants or a skirt, with white sneakers and a statement necklace,” says Oman-raised, New York-based Shruti Rya Ganguly, who runs her own production company, Honto88. It was while in class at Northwestern University that Ganguly saw Satyajit Ray’s Pather Panchali and had an epiphany. “Film combined everything I loved—art, design, culture, curiosity and music, and there was a business component to it, too.” She worked on the sets of Kaal(2005) and Chameli (2003), moving to New York to work at Island Def Jam. What followed were stints at Nylon, an MBA at NYU, and an MFA in film at Tisch, working with James Franco on films, a job at MTV Desi and finally Condé Nast, where she launched ‘73 Questions’ at Vogue. She’s now prepping to direct her first film, but her career highlight still includes being on a committee for the Obama administration. “As the only non-American, immigration, women’s rights and climate changes are things I discussed openly.”—Priyanka Khanna 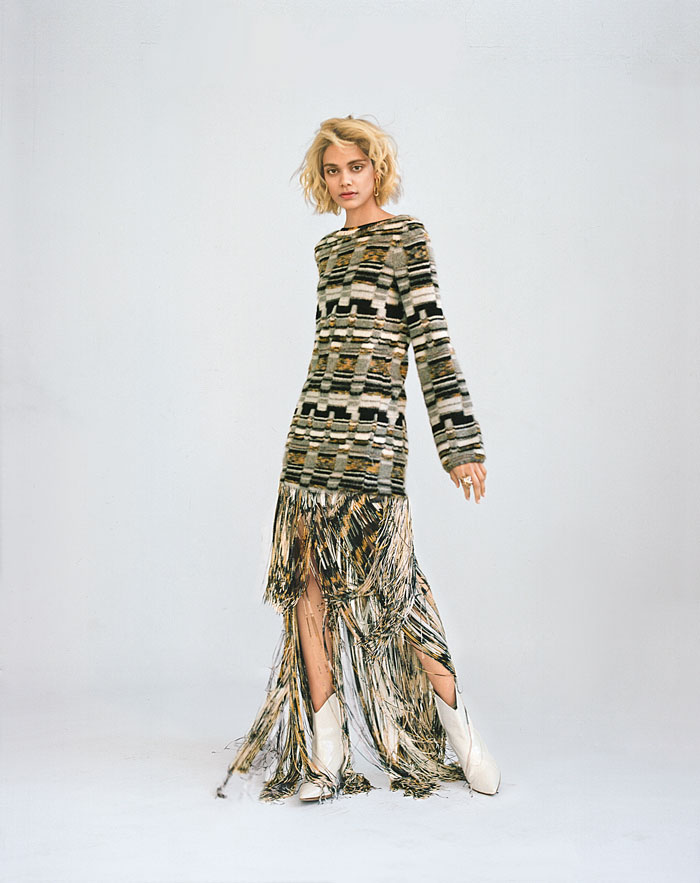 How many of us can pinpoint our career paths to an allergic reaction? Part-time model, documentary filmmaker and student on her way to bagging a PhD from Oxford University, Kumar’s career as a field conservation biologist in the Australian Outback took a turn when she became allergic to eucalyptus! The 24-year-old multi-hyphenate then began studying human evolutionary biology, with a focus on colourism. Born in Sydney, Australia, to a Punjabi father and Bengali mother, she now lives between cities—London is her current location, while New York serves as her professional base. Her wardrobe, similarly, is a cultural conflation. Think vintage meets grunge and a little bit bohemian. The one constant through it all? “I can never leave home without my Dr Martens.”—Akanksha Kamath 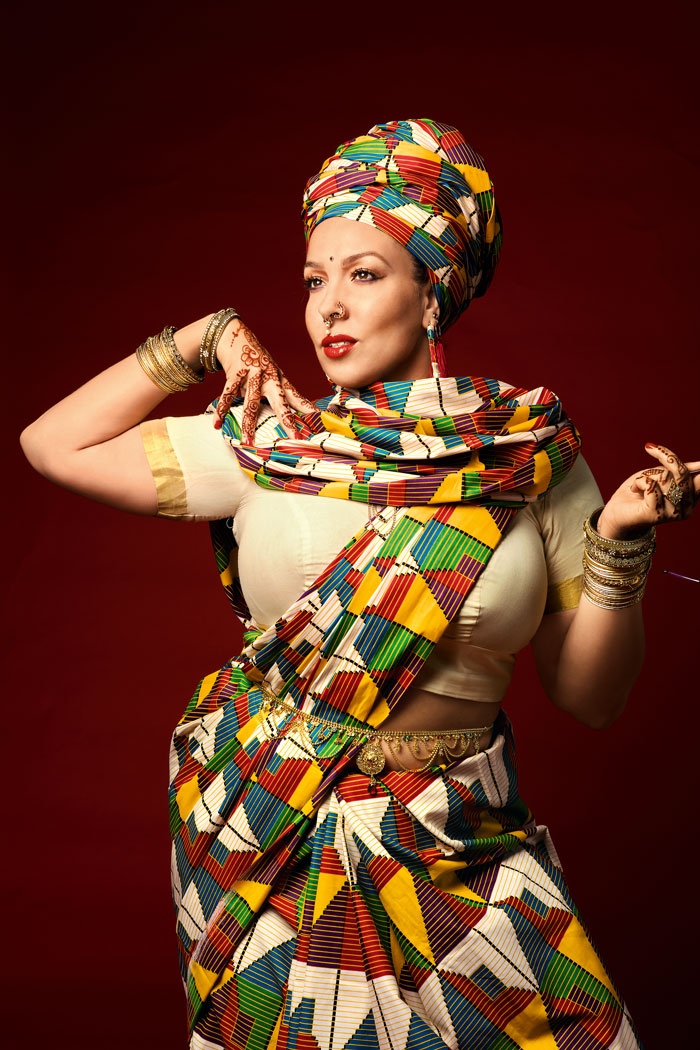 Born Kumari Lohar-Singh on a military base in California, Suraj’s debut on Fox’s popular dance reality show, So You Think You Can Dance, choreographing the show’s first ‘Waack’ performance in 2011, put the spotlight firmly on her individuality. She’s continued to gain recognition with her work for Dizzy Rascal, MC Hammer and Mya. Currently studying at the Fashion Institute of Design & Merchandising in Los Angeles, Suraj’s style reflects her Indian, African and native American cultures complimented with vintage pieces by YSL and Chanel, disco sequins and sportswear labels. Next up, a ‘queer-centric’ social media-based brand Her Drummer Her Dancer in collaboration with her fiancé, Malinder Tooray. “Our aim is to continue inspiring and supporting other queer desi and interracial couples,” says Suraj, an active member of the LGBT community.—Sheree Gomes Gupta An electronic music producer and drummer whose mission is to “elevate and celebrate the female voice,” Gandhi regards herself as an artist and activist. “My parents were always invested in giving back.” When the family moved to New York, Gandhi, then eight, was aware of how privileged she was. “It was about not writing a cheque, but about getting involved in the community in a hands on way,” says Gandhi, who recently hosted a voting awareness programme at her home for 500 people. Touring with rapper M.I.A during her first semester at Harvard Business School was a high point for Gandhi. “Another highlight was running the London Marathon on my cycle and starting a conversation about how we treat menstruation in various cultures,” says Gandhi. “I want to become the best version of myself; I put out a song called ‘Bad Habits’ [it rose to No 8 on the viral US top 50 Spotify charts], which is a sort of an accountability anthem.” She’s a firebrand even when it comes to her dressing, with red, yellow and orange being her preferred palette. “Mae Studio and NorBlack NorWhite give an update to traditional Indian patterns. I do that, too, in my activism and in my music.”—Sheree Gomes Gupta 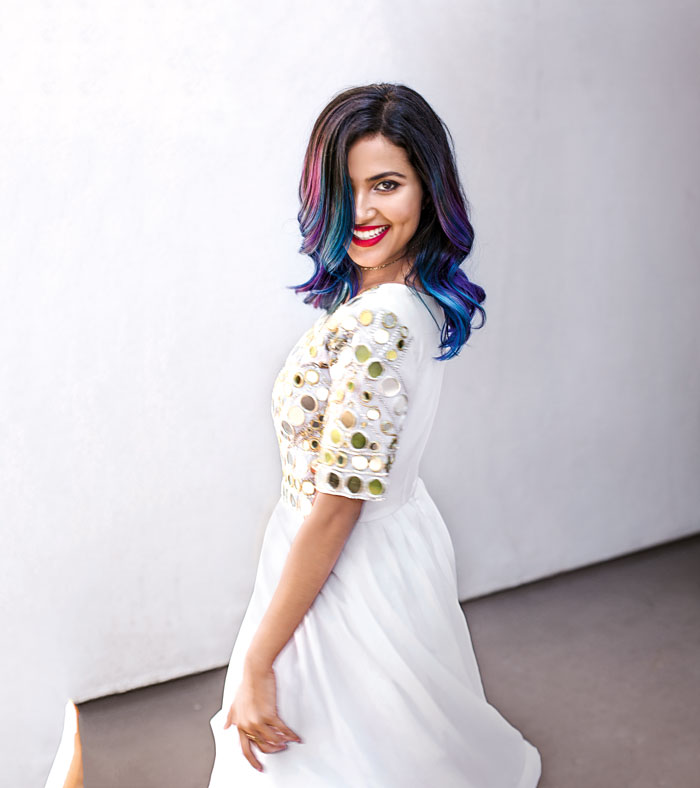 Music wasn’t always on the agenda for Chennai-born LA-based artist Vidya Iyer. “It’s been the longest road to get here. While I may have grown up learning Carnatic music, I studied Psychology and Pre-medicine and was firmly on the path to becoming a doctor,” says Iyer. A collaboration with American composer and clarinetist Shankar Tucker is what triggered the transition from aspiring doctor to YouTube star. “I toured with Shankar’s ensemble when I was in college and after graduating. Then I came to Mumbai to immerse myself in learning music. After two years, I moved in with my mom in DC, started my YouTube channel and here we are.” Today, her cross-continental journey has influenced both her viral mashups and sartorial sensibilities. “My style motto is: What if Coachella came to Rajasthan? So, you’ll find lots of big oxidized jewellery, Indian prints in Western silhouettes, my mom’s and grandmom’s old saris and pyjamas!”—Neharika Manjani “Technically, I spend half my time living in London and half my time living in Los Angeles, but in reality I’m mainly living out of a suitcase, constantly on tour,” says Aithchison, better known by her stage name Charli XCX and as the voice behind popular hits like ‘Boom Clap’ and ‘I Got It’. Born to an Ugandan-Indian mother, she is yet to visit India but says growing up in her grandparents’ home has given her a strong understanding of traditions. At 14, she was contacted by a London promoter to perform and ever since there’s been no looking back. “I was very inspired by party culture from a young age. I’ve been making music for 10 years now and I also write songs for other artists, including Icona Pop, Iggy Azalea and Selena Gomez.” She left school soon after, and in the last decade has grown as an artist and a performer. “I think becoming more confident with who I am and letting go of the fear of what people will think is a personal highlight. I have found what is unique to me and I’m very proud of that.”—Priyanka Khanna 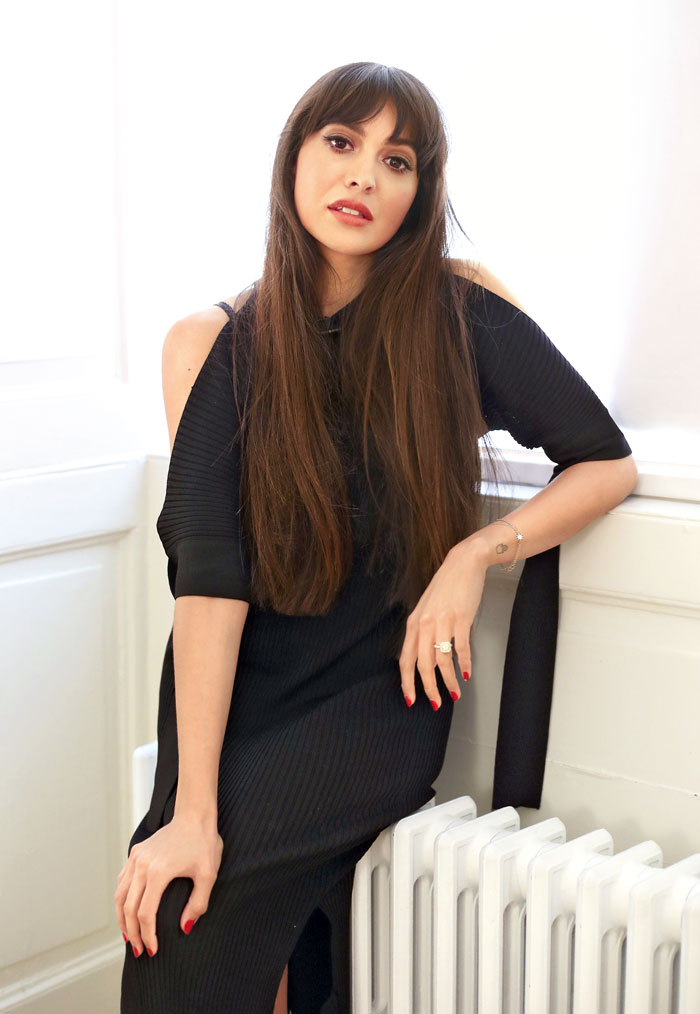 Born and raised in London to an Indian mother and British father, Zara Martin’s striking looks and rock ‘n’ roll image first helped launch her career as a model and TV presenter when, during an unpaid internship at MTV she convinced her bosses into putting her on screen to host her own segment. Her passion for music—hip hop, in particular—eventually led her to deejaying. Today Martin is one of London’s leading DJs on the fashion and private party circuit. She has worked with global fashion and tech brands, including the likes of Chanel, Samsung, Estée Lauder, Tom Ford and Versace, and collaborated with British high-street favourite label Skinny Dip to create a line of headphones sold in Topshop and ASOS. Next up for this multitasker is a film with Freida Pinto, releasing later this year. More than just a pretty face, Martin, an Economics graduate, is also an ambassador for Women For Women International, a charity dedicated to helping female survivors of war rebuild their lives and choose their own futures.—Malika Dalamal 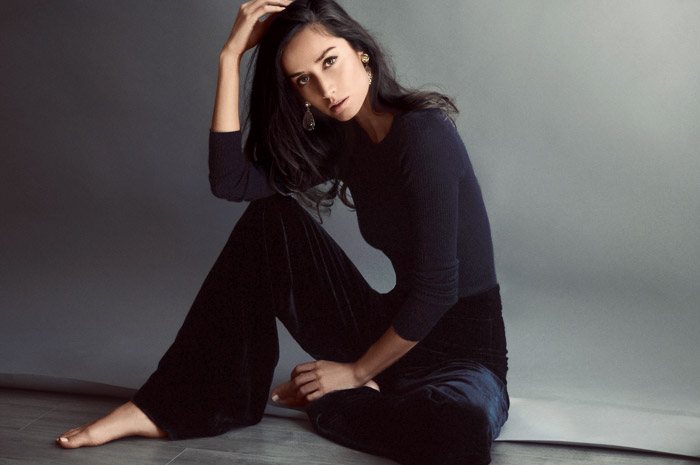 “I grew up in Melbourne with my Australian (Scottish and Prussian) mother and Indian father. I always felt a little different. It wasn’t until the first time I visited India that I realised I was truly a mix, a clash, a balance of both East and West. All my deep interests, subtle quirks, curiosities that seemed a little different from the average Australian seemed to make sense,” says Luther, who has been moving addresses since she was 19. For her, a job is not a static, desk-bound scenario. It’s studying human rights, acting and theatre, modelling, singing and a side hustle concocting perfumes using natural Ayurvedic ingredients. Right now, though, modelling gives her the financial freedom to explore the world, while music is her creative outlet. “I have been writing songs since I was 10 and now I’m recording my first album in Los Angeles.” When off-duty, she wears a uniform of all-black. “I’m usually preoccupied, so black is simple. And I love anything vintage from the ’60s. Most of the time I live in well-loved cashmere sweaters.”—Akanksha Kamath 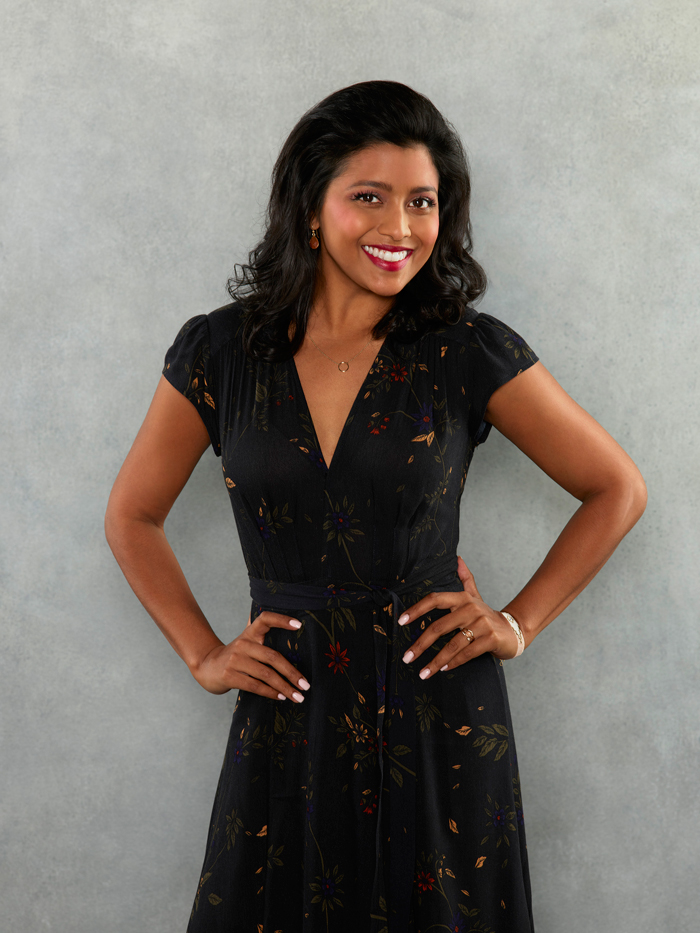 Tiya Sarcar was born to professor parents and holds a degree in Business but don’t let her academic background fool you. The 36-year-old (you might recognise her as the Twilight fan in The Internship or as the real Eleanor in The Good Place) traces her love for performing back to her toddler years— the Texas-born actor began training in dance when she was only two and a half years old. At the age of 18 she landed in LA and promptly bagged her first role in an episode of Disney’s Hannah Montana. Since then she has made appearances in a slew of binge-worthy series (Vampire Diaries and Master Of None, to name a few) and lent her voice to Star Wars Rebels. Fun fact? The multihyphenate is also multilingual—Sircar can speak Bengali, French, Spanish and Italian.—Neharika Manjani 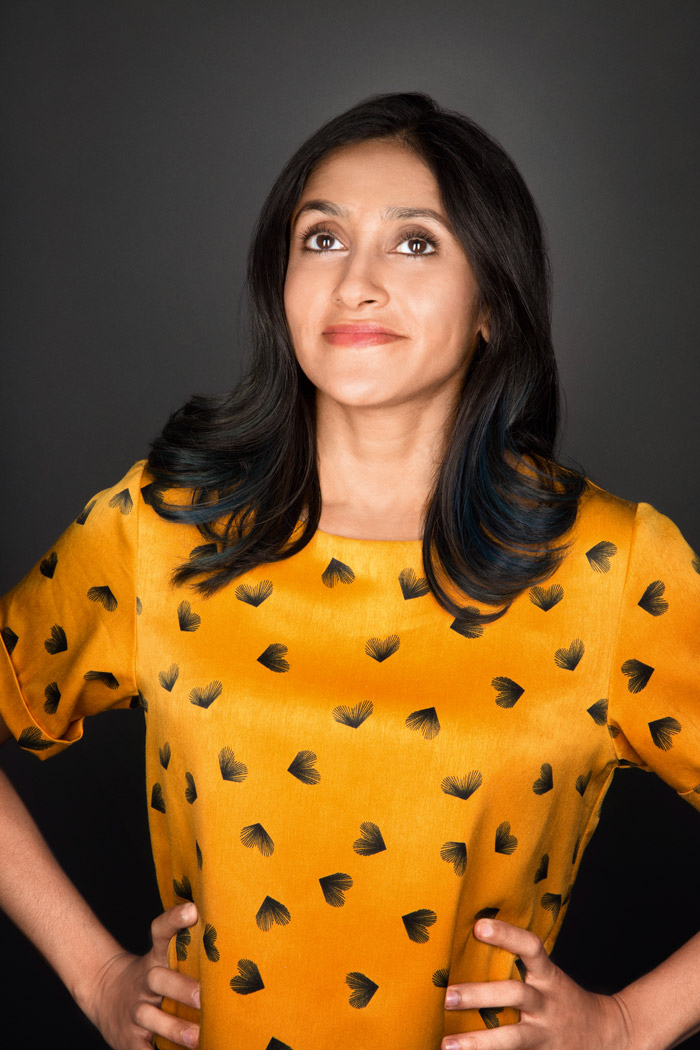 Ever since her breakthrough performance in 2013 that won her the ‘New Face’ award at the Just For Laughs Festival in Montreal, Nancherla’s rise has been meteoric. In the last five years, she’s written for several successful shows, including Late Night With Seth Meyers, appeared on Inside Amy Schumer, got her own half-hour special on Netflix’s The Standups, and starred in A Simple Favour, with Blake Lively. Having suffered depression and anxiety, Nancherla’s signature performances include her humorous take on mental health disorders without trivialising the issue. In fact, she’s so committed that she created ‘Blue Woman Group’, a podcast that aims to help “overcome issues facing modern depressives.” Exciting times are ahead for Nancherla—Disney Junior recently announced a new animated show Mira, Royal Detective with an all-South Indian cast including Kal Penn, Aasif Mandvi, Freida Pinto and Nancherla, to be launched next year. It’s no surprise then that the Indian-American has garnered a massive fan following in just a few years.—Sheree Gomes Gupta

Check out all the 49 incredible women who made the list here!