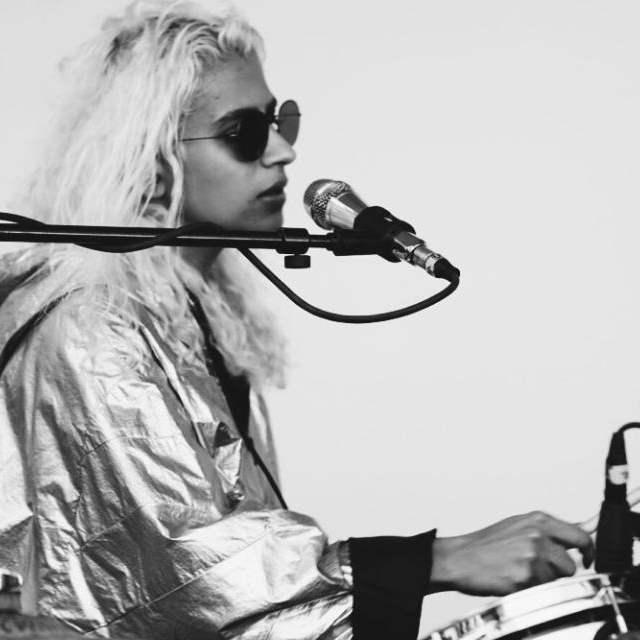 By Tracy Kawalik for i-D Vice

Ferociously skilled drummer, electronic musician, free-bleeding marathon runner, fierce activist… Madame Gandhi is the feminist badass born to break conventions and command attention. Fresh off the plane, and ahead of her solo London show tonight, we sat down with the sometime M.I.A. drummer for a nice chat about performing, making music with Erykah Badu producer Zach Witness, and what made now the right time to step up to the mic and take centre stage. Have a read and press play on her exclusive Future Is Female mixtape below.

Hello Madame Gandhi! Your track The Future is Female went viral on Spotify last year. What made the timing right to release it?
It’s funny, because even though Future is Female was one of the first songs that I started, it was actually one of the last ones to go on the EP. It was so important to me and I felt a lot of pressure because of that. Obviously every time I listen to it now I think “This could have been better, or this could have been better,” but that song really needed to come out when the women’s march happened. Artists wait and wait and wait until the moment that they think is right, but honestly music is just a form for self expression. Gandhi used to change his mind every two weeks because he’d learn new information and people used to hate that! But he’d be like “Yeah I’ve changed, but I’m two weeks smarter, I’ve learnt so much more!” Music is the same! If we wait and wait and wait, we’re never gonna put the song out!

At what point did you decide you were meant to be a drummer?
I was in a summer camp a couple hours north of New York City. They made all the kids do water activities in the afternoon and I didn’t want to do that so I remember sneaking away to the theatre cabin and hiding out over there. Eventually I saw the drums in the theatre and at the same time there was a maintenance man in there. I thought for sure he was gonna come and turn me in, but it turned out he was a drummer! So from there he started showing me how to play the drums and for the rest of the summer I was always drumming… Then the rest of my life really!

When did you start getting spotted and playing live?
When I was in college in D.C., I stopped kinda trying to play the rock stuff and really started to dig into Cuban and Brazilian rhythms. That’s when I started getting gigs playing live percussion and drums while a DJ would spin — and that was literally the coolest gig of my life! I did that all through college! That’s how I ended up getting a gig with Thievery Corporation, playing live percussion with them on stage at a bunch of different clubs and nights they used to do. And that’s pretty much how it went down with M.I.A too. She had a live DJ and I started playing percussion and drums over that.

What propelled the transition from drummer to solo artist?
When the London Marathon story (of me running free-bleeding with my period) went viral, I could never have imagined in a million years for that to happen! Suddenly people from all over around the world were calling me to ask me my opinions, on menstrual health and hygiene and about women’s equality today. These are issues that I had always been talking about and had always cared so much about but had only ever voiced within my own circles. So when that marathon story went viral I just felt it was this moment where I had a choice. I could keep working in the industry or really step into the shoes of the person that I wanted to be. Someone who had a voice in the conversation surrounding modern feminism. I really felt like it was MY time.

What are you listening to at the minute?
I’m honestly just listening to Fela Kuti all day long. Fela Kuti helped me get through my late teens and one of my new songs coming up is deeply inspired by Fela. I’m working on it with an amazing young producer named Zach Witness. He’s a really special one. He just did the last Erykah Badu record and I saw him at SXSW and was like “Oh My God! This is the kid to help me finish the song.” So I flew him out to LA and he lived with me here for a week. I felt like there was an angel with me. I really felt like on some next level stuff.

That’s not easy as an artist to find that creative bond with someone…
100%! Because I really didn’t want to work with any men. One, because there’s not enough women who are employed in the music industry. Two, because there’s so much unearthed female talent. And three, from an empathy standpoint, I had kinda made the assumption that women were the only ones who’d understand what I’m talking about when I say “Owning your own voice.” But I was so moved by Zach. He talked to me about a lot of stuff that he’s experienced in his life and within the music industry. I was like “Wow! This is the first time I feel like I worked with a guy who believes in my message not for the women in his life, but for himself.”

Finally… can you talk us through your mixtape?
3D femininity. I’m pulling artists like tUnE-yArDs who is amazing, and Princess Nokia — I love checking for her, Young M.A., Kelela. Women who are hard and aggressive and talking about all the bullshit in society and then other women who are talking about love and learning from a past relationship or feeling lost or feeling confused. I’d like to build a playlist that allows us to feel healed by the music and also feel like we’re in touch and dialled in… Powerful too.