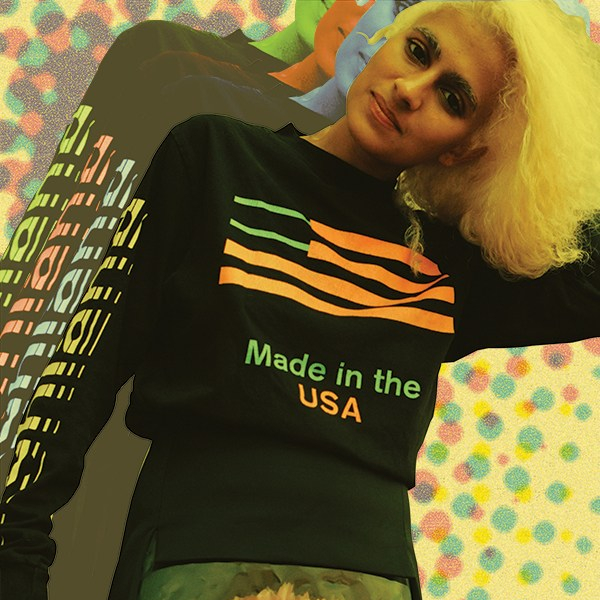 By Sophia Jennings for Milk.XYZ

“On paper, Kiran Gandhi is the former drummer for M.I.A. who ran the London marathon ‘free bleeding’ in 2015. She also graduated from Georgetown, worked as a digital analyst for Interscope Records, and has a Harvard MBA. But Kiran Gandhi the woman, I soon found out, is that and so much more.

When I first reached out to Gandhi, it was via email, and she promptly responded with a phone call. In an era of text, email, and the occasional Instagram DM, it’s unusual for someone to pick up the phone. But that’s how Gandhi works. She wants to talk now, and she wants to do things right. Put differently: she’s not like most artists I know.

While I refer to her as Kiran Gandhi, it’s actually Madame Gandhi, her newest musical project and moniker, that’s on the forefront of everyone’s minds. Gandhi, who was raised between New York and Bombay, decided on ‘Madame’ because of its connection in India to female empowerment; she mentions Madame Indira Gandhi, the first Indian female prime minister, as well as the potential Madame President Clinton. ‘It’s about celebrating female leadership,’ she said. ‘We teach women to masculinize in order to do well in their job or as a leader. I wanna live in a world where we compliment men for being emotionally intelligent, for being collaborative, for being feminine as a desired thing.’

Premiering on October 28th, Gandhi’s upcoming EP, Voices, is comprised of five tracks that were recorded between L.A., Oakland, New York, and London. Gandhi describes her stage persona as ‘3D femininity,’ empowering women to speak up by giving voice to the complexity of the female experience. One of her tracks, ‘Gandhi Blues,’ for instance, addresses some of the pressures women typically face, such as having to balance work life with home life; while ‘The Future is Female’ acts as a sort of call-to-action for women, urging them to speak up. When listening to the album, it’s hard not to notice the use of drums. In most songs, Gandhi explained to me, drums are rarely more than an extra add-on. In her songs, however, she deliberately amps up the drums and, in doing so, elevates them from mere background noise to front and center. ‘They’re the driving personality besides my voice itself,’ she said.

For her album cover, Gandhi settled on a photo of herself in a white collared shirt in front of a yellow background—an image that, to her, is both feminine and empowering. ‘My name means the first ray of the sun,’ she told me, ‘and women are the ones who give birth to the next generation, so the sun is life giving.’

“I WILL USE MY OWN PRACTICES [TO] REPRESENT THE WORLD I WANNA LIVE IN…WHICH IS A WORLD WHERE MORE WOMEN TALENT GETS SEEN.”

Last week, Gandhi premiered the glitch-y, tech-tinged video for her song ‘Her’; technology, she explained, will always figure prominently in her videos. ‘When you wanna create the world you wish you lived in, using literal imagery doesn’t really achieve that,’ she said. ‘So I like using tech backgrounds.’ In the future, she hopes to explore more 3D and 360 formats. ‘I want to be the artist that uses tech intelligently to comment [on] and celebrate gender equality, feminism, and young women’s voices,’ she added. In ten years, she imagines a live show that inspires empathy in others—through the use of VR, projection mapping, or else some other not-yet-discovered invention.

Another thing you should know about Gandhi is that she’s hell-bent on working with almost exclusively women. Most people assume that there isn’t a woman to do the job, Gandhi explained to me—whether that job is a gaffer, a colorist, or a sound engineer. ‘I will use my own practices [to] represent the world I wanna live in,’ she said, ‘which is a world where more women talent gets seen.’ That’s not to say she doesn’t solicit help from men; after all, her manager, Steve, is a dude. ‘I [work with] men who are understanding and empathetic towards the female experience,’ she said, before going on to compare it to the Selma to Montgomery marches in Alabama, and how it took bringing white allies along to successfully cross the bridge. ‘When you want social justice and cultural change, you start as an energized group, but you do need supporters who look like the oppressors to be on your side.’

And she brings this same, feminist bent to her shows. ‘It’s high energy, it’s smiling, it’s lots of laughter, it’s joy,’ she told me. She recalled a 2008 Santigold concert in Berlin, where she apparently danced and danced until Santigold pulled her up on stage. ‘I was so happy,’ she said. ‘I’ll never forget that memory. Bringing me in to this thing she had made and allowing me to be part of it, I always wanna do that for my audience.’ And at her last show, she did just that—and even went so far as to give the girl an all-access pass.

The day after our interview, I text Gandhi on my lunch break, only to discover that she’s already in Mexico City for a performance, after which she’ll be flying over to the White House. On October 11th, she’ll perform at The Bell House in NYC to raise money for Sakhi, an organization that works to combat violence against women, before flying home to L.A. for a Fuck Rape Culture fundraiser on October 15th. Gandhi is always moving, always shaking; as soon as you think you’ve nailed her down, she’s already moved onto her next endeavor. She’s dynamic, always exceeding your expectations, and—like most women out there—can’t be pigeonholed or typecast. And that’s kind of the point.”