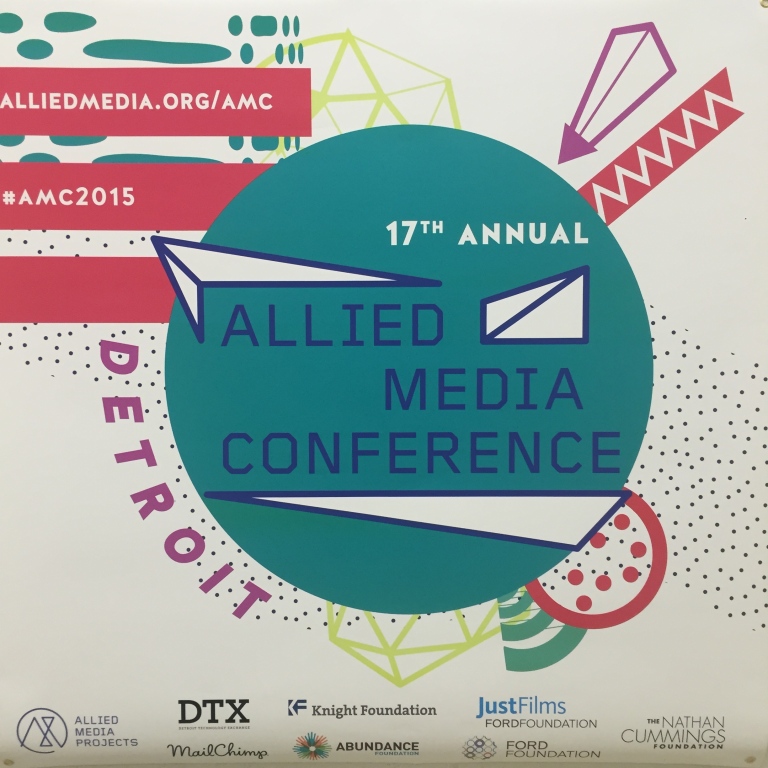 Detroit, MI. Allied Media Conference 2015. Three homegirls and I co-created a workshop called Creator Kinship this year. The thesis of our workshop was that there is an opening in the industry now to re-write the rules of success. “She who goes first writes the rules.” Our goal was to a) share hacks with one another to solve certain problems we are each facing in our own careers and b) solve larger problems through an entrepreneurial workshop. 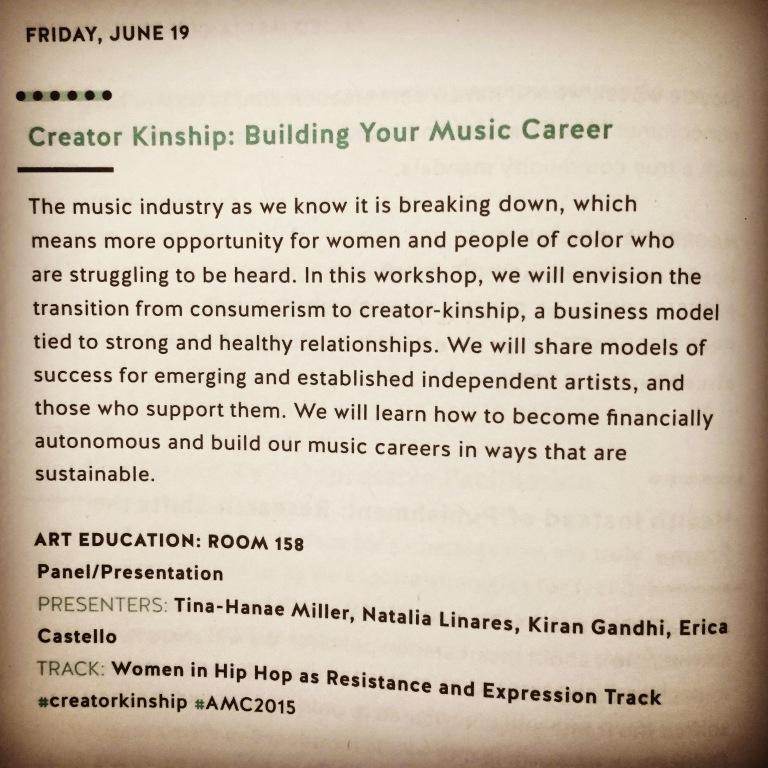 We started by having each person on the panel, Tina Hanae, Erica Castello and Nati Corazon, speak about their time working with or as an independent artist, and ways they have used the resources and capital in their communities to propel independent art forward. We then opened it up to the group to each introduce themselves and share a) a problem they are looking to solve that can be outsourced to the group or b) a solution/hack they recently created that is worth sharing with a group of creators! We had a group of about 40 people in the room!

We then broke up into groups of 6 and handed out pens and post-its. Each group would have 3 minutes to write down as many problems they saw in the music industry they could think of – one problem per post-it. The winning group came up with 50+ problems, so we awarded them CDs and Tom Tom Magazines! In the second iteration, we gave each group 3 minutes to come up with ways music delivers joy. The winning group came up with 80+ ways, and they too won fun prizes like stickers, magazines and CDs.

Each group presented. Everyone stayed well beyond the discussion, exchanging numbers, ideas, photos and information. It was powerful and hopeful. It was creator kinship – the notion that we have the power in our own communities, to look internally, and build the solutions we wish to see. It was the notion that if you build the solution, you get to write the rules, you get to have power to do good with your ideas, and create solutions that are free from greed or pain.

When we ran this experiment, I thought lots about the notion of anti-capitalism. This was a constant theme at AMC, and yet frameworks supporting capitalist values had formed the heart of my education for the past two years. I thought lots about the ways capitalist values affect different communities, and I arrived upon the idea that it’s not necessarily capitalism, as a concept, that people hate. Capitalism, as I understand it, is the ability to deliver and receive value without opposition. What people hate, is corporate greed. Is gatekeeping. Is exploitation. These are capitalism gone wrong. Capitalism in the hands of people who know how to bend to rules to their advantage at the expense of others. This is what we hate, what M.I.A hates, and even what HBS warns us against.

But I will say this. I will say that being able to use valuable lessons from business school and bring them to people in the social justice and art worlds gave me a sense of purpose. That we can do incredible work and make our own rules using the very business techniques that once oppressed us. Business has a 1% energy to it, it has an ENRON face to it. But at its core, business is the ability to deliver value and joy to people and be able to sustain yourself off of it. And so it should be accessible to all. Nothing is more empowering for a human than to feel they have purpose, to feel they are contributing to a larger cause and to be able to live off of doing just that.

And I felt grateful, to, for the first time since graduating, be able to do exactly what I said I was going to business school for: to empower artists with business skills they need to live off of the art they make!