Some of DC’s finest…

As I mentioned in my post before, I love DC because everyone seems to live double-lives in this city. DC is full of smart people living out their dreams in various ways, which in turn pushes the city forward creatively and intellectually without anyone realizing it. Here are some of the people I have met since coming back from Hong Kong. 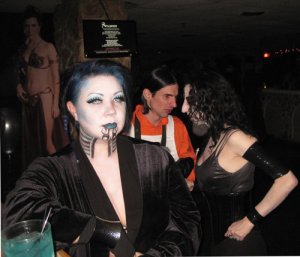 I met Sasha last week at Mac Make-up on M Street in Georgetown. I was with my mom and she needed a brush or something of the

like, so while she was shopping I started chatting with Sasha. It turns out Sasha works as a gothic belly dancer at night in various parts of DC and

also travels with a troupe to promote gothic culture and share their art. Never heard of something so fuckin awesome in my life.

Tyrone: I was on Florida avenue down in Shaw waiting for the bus to go to Matt/Dan/Ezra’s

house for City Folk practice and I started chatting with a man named Tyrone who had lived in the area for several years. Somehow it came up that I wanted to stay in DC and understand its local politics as much as I could, and he said that there was lots that he could tell me since he had been living in the same neighborhood for over 30 years. He owns B&J Carryout on Rhode Island Avenue and I hope to go there this week or next to find him and chat more (http://www.yelp.com/biz/b-and-j-carryout-washington . The best part about this story? I texted him randomly a few weeks after I had met him and invited him to City Folk’s show at The Velvet Lounge on June 10th. He texted back that he’d come, and he came right on time. It was awesome. People are awesome.

He got me out to Eastern Market to a new art/music venue called The Fridge (http://www.thefridgedc.com/) and I’m so glad I caught him because this venue was so beautiful and such a great idea. It seemed to be an old shed turned art gallery/music venue and was just all about the stage, the band, some drinks, some art and you. Organic. No bullshit.

Here, I met Glodine Young. This shining, beautiful, intelligent, lovely woman who was able to identify the shortage of soulful music venues in DC and who actively sought to open up a music venue in a place that many people from area of town wouldn’t normally go. Even though the metro spits you out just a block away from this place, people in DC who might live in parts of

NW, tend to be reluctant to get out to these parts. I don’t know if it’s because the metro closes early, if it’s because the metro might not access that many places in NW or if people are too cozy living in their little bubbles in DC, but this compartmentalizing of good people/good places/good areas is one of DC’s biggest fatal flaws. In places like NYC or HK, because the flow of people from one area to the next is facilitated by a strong transportation system, people tend to see more of their city than those in DC seem to. Glodine picked up on this and explained to me that she wanted to make sure that true DC-music lovers were flowing through the parts of town where some of the most important homegrown music, Go-go, was cultivated. The owner of the Fridge, Alex Gold, was another genius as well. When I get to spend more time with him I’ll include more on his story.

Mimi Buffington: I was in the ladies locker room of the Sports Club/LA on 22nd and M street where I coach squash and I overheard an elderly Iranian woman talking about Iranian music. I had to jump in and tell her that I loved Iranian music and would love to know if she had any recommendations for me in terms of what to listen to if I want to practice my tabla rhythms. Instead of recommending some names right there on the spot, she insisted that I call her and come to her house to listen. I was really busy that week but I dug up her number the following week and before I knew it, I found myself at her luxurious apartment just off Dupont Circle, sipping sweet wine and enjoying heavy Iranian treats. She played some of the most upbeat and exciting Iranian/Arab music I had ever heard and tried to introduce me to her single and available 30-something yr old sons. Her story was really interesting to me because she has been in DC for over 30 years and was telling me about all the foreign balls and soirees she used to attend for the DC elite. Today, she enjoys disguising herself as a homeless person in Dupont Circle so that she can interact with other homeless men and women on the same level. She goes by “penny lady” when she is out on the streets and told me stories of homeless men that offered her sandwiches, blankets and pennies because they believed that she was sharing their same condition. While there are aspects of this that may seem wrong, I was overcome with respect for her. Here was a woman living in the most lavish apartment doing what she could to get to know DC’s homeless and connect with slices of life that she could easily have kept herself blind to. It was so amazing. Here we give DC’s homeless so much criticism and yet she was able to see only the best in them.

Courtney L. Jones: Although I don’t have a photo of the fabulous Ms. J, I can describe her to you. I was sitting at the D6 bus stop with my brilliant roommate Tripti (who will be heading to Berkley in the fall for Graduate studies) last week about to go to have cocktails hosted by Michelle Kim (one of the leading violinists of the National Symphony Orchestra, whom I happen to coach in squash at the Sports Club/LA). We were waiting for the bus and started chatting with this young girl wearing a Georgetown Hospital shirt since she had just gotten off work. Turns out she was only 19, put herself through high school and was now working at the hospital to buy studio time to release her own album. She calls herself “Realistic” and is one of the most brilliant MC’s/rappers I’ve heard out loud in a while. Her words were intelligently crafted and came from the mind and soul. I asked if I could hear some of her stuff and she pulled out her cell phone, in which she had all of her songs saved as text message drafts. It was simply amazing. I linked up with her a few times after that for dinner on campus and we are hoping to keep working together distribute her music and keep her momentum going. Look out for this girl.

Finally, Kristen Arant: I have known Kristen Arant for the past 3 years through her work as the leader and founder of The Young Women’s Drumming Empowerment project. Last Saturday, it was her wedding to another talented drummer from Ghana named Kweku. Their wedding ceremony was a night I’ll never forget. Held at the home of Mr. Abassi, a friend and mentor to the girls and families of YWDEP, the drums could be heard for blocks around. I met up with Liani at the Takoma Park and we made our way down to Mr. Abassi’s address, which turned out to be a haven carved out in the middle of a very suburban, quiet part of the city that rests just on the border with Maryland. The vibes were thick. 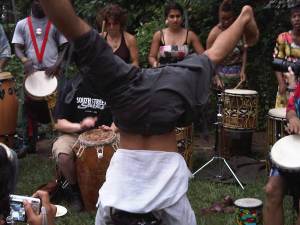 Beautiful apparel from the around the world, potluck style meals, drums all over the backyard, and some of the most talented players sitting down to play together in celebration of their two good friends. The dancing was free-spirited and authentic and aggressive in the best way imaginable.

The group was diverse in every sense of the word. Everyone was a family, and I got to see many of the community of musicians, yogis, actors, writers and MCs that I hadn’t seen in six months. A wedding is a time to bring people together and celebrate. Kristen had everyone dress up in festive, international attired, contribute a dish or a dessert and bring a drum, and by doing this, she created a haven for people of all walks of life to get together for a few hours and feel united in the most genuine sense of the word.