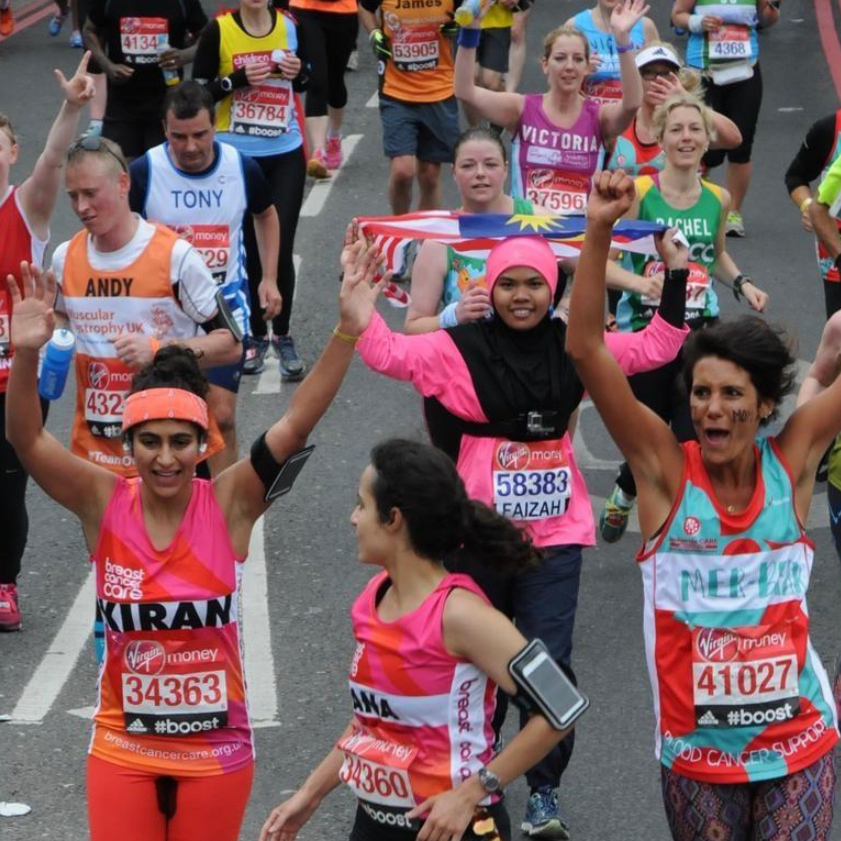 I started running to feel powerful – and it worked. As a student at Harvard, I remember looking at the Charles River in Boston when it was snowing, and yet still I saw so many runners out there. It’s cold and yet there’s this fierce desire to get out there and get it done. I was so inspired by that. I was just like, I want to be one of those people who gets up in the morning and goes for a run out in the rain, the cold.

When I ran the London Marathon free-bleeding on my period, I definitely had no idea it would have such an impact. We arrived at the start line and I realised it was day one of my period. Like any of us caught unprepared on our menstrual cycle, you just start evaluating your options. I didn’t have a pad – besides that can cause serious chafing in a marathon – or a menstrual cup and I didn’t have a tampon. Anyway, is that an appropriate solution for five hours of running? There’s no privacy to change it out on a marathon course – I genuinely had these thoughts. During training I had skipped the first two days of my period so didn’t have practice. So, I said I’d rather just run.

Did I know it was radical? Of course. I felt it was kind of punk rock to run a marathon bleeding from anywhere. I knew that there was something empowered about that. I also thought: “Who’s going to shame a marathoner?” Like, I’m running 26 miles bleeding and I’m doing it successfully. Come and run 26 miles before you want to make me feel bad for this. I had this very clear sense of personal power while doing it – plus a bit of fear – but the more I ran the stronger I felt.

The year before I ran the London Marathon I was touring with MIA all over the world. When that went away, I remember going into a bit of depression, I had gained some weight because I wasn’t eating super well and I was stressed doing a Harvard degree, which was very intense. So I ran the marathon to have a new focus.

Kiran Gandhi ran a marathon to have a new focus after spending time touring with MIA CREDIT: Reece T Williams

I felt so proud of myself, not only for finishing the marathon, but also for overcoming this kind of belief that on our cycle each month we’re moody, we’re this or that. None of those things aren’t true. But the fact that we can push past that and be in control of that was so inspiring to me.

I’m in such a position of privilege to even choose to run in the way that best suits me and make this choice for my body. It was a thought I had while running in London. That should not be a privilege, that should be the norm, and yet millions of women and girls and trans folks who bleed all around the world are forced into a position of silence, where we can’t talk about what’s happening with our bodies and can’t ask for the products we need. Stigma is one of the most effective forms of oppression, so when I crossed the finish line, I wrote about it.

When the story went viral it was incredibly intimidating. The story was trending for four days on Facebook and Twitter, and people all around the world were hitting me up for interviews. I was just a student. So it really jump-started me into taking these ideas that I’ll be discussing privately with my friends and saying it into a global mic. You never want to get it wrong. But I do think there’s something genuine about speaking from the heart, and that’s what worked and resonated.

As a kid I played sports, but I don’t think anybody saw me as sporty – I think I was more seen as the music kid. But I loved running, squash and tennis and I was the captain of the volleyball team and enjoyed that leadership role. Since that particular experience I felt more validated by the leadership aspects, camaraderie and the emotions of leading a team to a destination. And I use that in my music videos and when I’m producing music.

My relationship to sports now is far more through the lens of spirituality, mental and personal wellness, clearing the chakras or channels. I incorporate my running, yoga, boxing, surfing, snowboarding, and I see them simply as a means to be a better musician, to be a better thinker, to be a better person – it’s a support role. I didn’t understand that when I was younger, but I would have loved if I was told that sports are just for your own mental health or for your own clarity. I’m drawn to boxing for the psychological blocks that it allows me to break and push past.

I live in LA and in November, when the New York City Marathon opened itself up to being virtual, I ran it remotely by the beach. I was with my dear friend who I do all my marathons with, and we ran all the way down the Pacific Coast, through the beach cities, and then back, so 13 miles down to Long Beach, and then 13 miles back up to the Santa Monica area.

I’m in Memphis recording my new album, and running is a cool way to explore the city. I’m not so strict about the run, like if I see something that I want to stop and go explore, even a shop that’s really cool – so I’ll buy clothes during my run. I’m not so rigid with my workouts that way, I like there to be flexibility.

By Kiran Gandhi for Telegraph UK