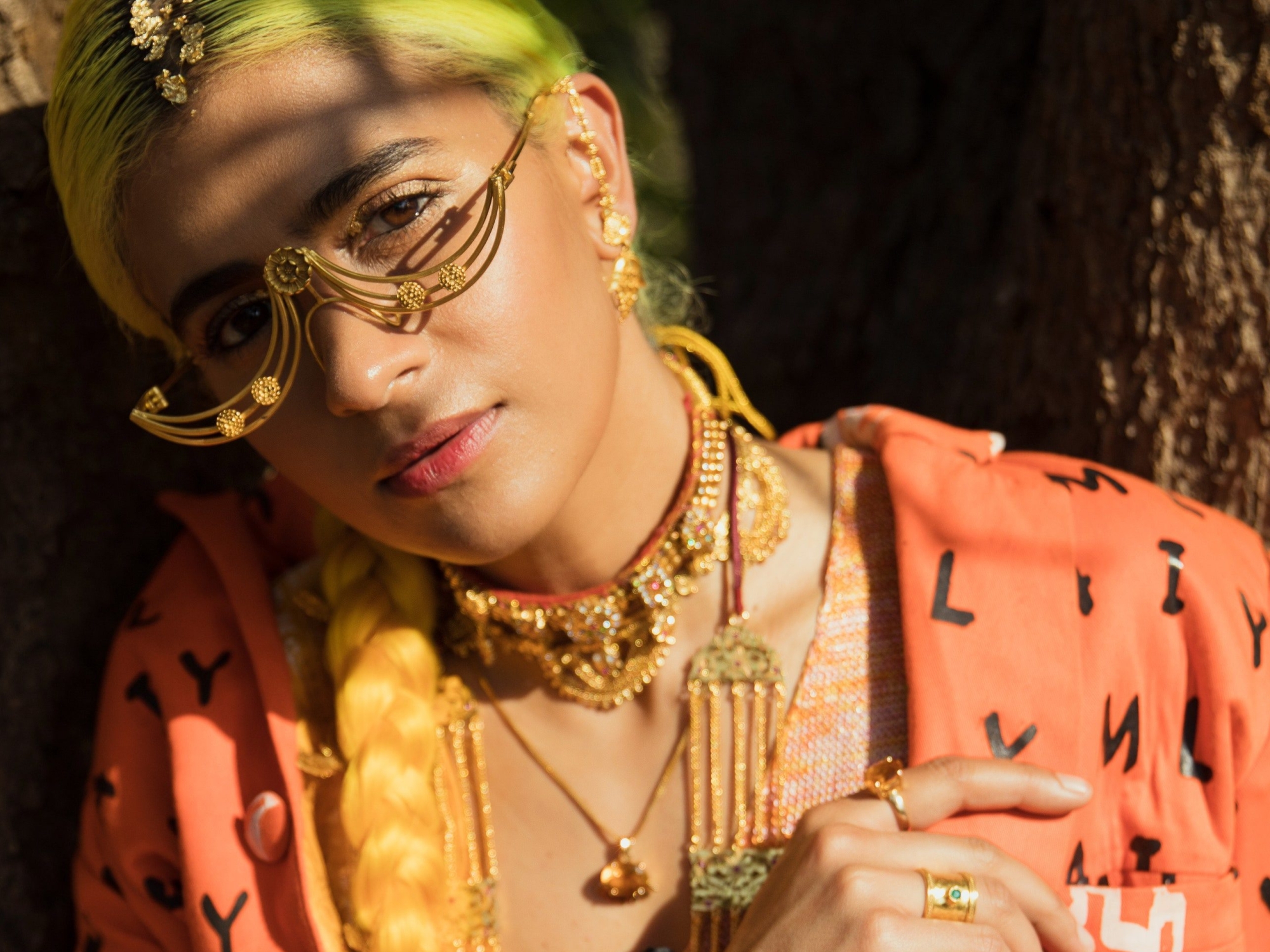 Shot in Mumbai, the LA-based artist collaborates with brands like NorBlackNorWhite, Rajesh Pratap Singh and Kichu in her latest music video, “Waiting For Me.”  Watch the video below.

A yellow mic has been the tool of choice for Kiran Gandhi during lockdown. Just when the world retreated indoors, the electronic musician and activist, who goes by the moniker Madame Gandhi, converted her home studio into her stage. Since March, she has been hosting performances, promoting strong female voices and chatting up with a diverse lineup of musicians and activists from her extremely Instagrammable neon-lit bedroom. “It is the feeling of the collective power that inspires me to go back to both my social media channels as well as my lyrics to speak truth to power,” shares the LA-based artist in an email interview.

A millennial with a voice that matters, Gandhi’s onstage persona thrives on bringing her art and activism together. Young and defiant, sassy yet serious, she uses wordplay and wit to empower women. “We always assume our own powerlessness/ but never our own power,” she delivers in the opening of her latest song ‘Waiting for Me’, unleashing a torrent of catchiness that we often don’t associate with meaningful music.

The song guarantees flashbacks to 1979, when Pink Floyd released their anthemic ‘Another Brick in the Wall’ that voiced Roger Waters’s discontent with the British school system. Gandhi was eight when she could see through the banality of homogenised schooling and the regimented education system in India. “I went to school in Mumbai, at St Anne’s in Colaba between 1997-1998, and I remember there was no room for creativity within the learning or the uniform,” she recalls. “I did act and write poetry, but it was always within a certain context. We as children were rarely asked what we thought.”

Two decades on, she revisits that time with a video that was shot over two days during her India tour this February. “I knew the home for ‘Waiting For Me’ was India. I had never shot there before, but I’ve grown up between Mumbai and New York City, and always wanted to connect my art intentionally to my South Asian heritage,” she says.

As Gandhi raps over skittering beats at a plodding pace, the video unfolds a contrasting view. It draws constraint and freedom by teetering between a hypnotic universe of bleak greys and blacks (with hints of fluorescent yellow) and then a flaming cast which delights in an exhilarating dance in the great outdoors. “My Irish grandmother always taught me to match and to value creative fashion, while my Indian grandmother always celebrated my name, Kiran, which means ray of light, by dressing me in yellow and orange clothing,” says Gandhi about the sunny palette that defines her discography. “I love how bright the colour is, how positive it is, and how it represents new horizons.” 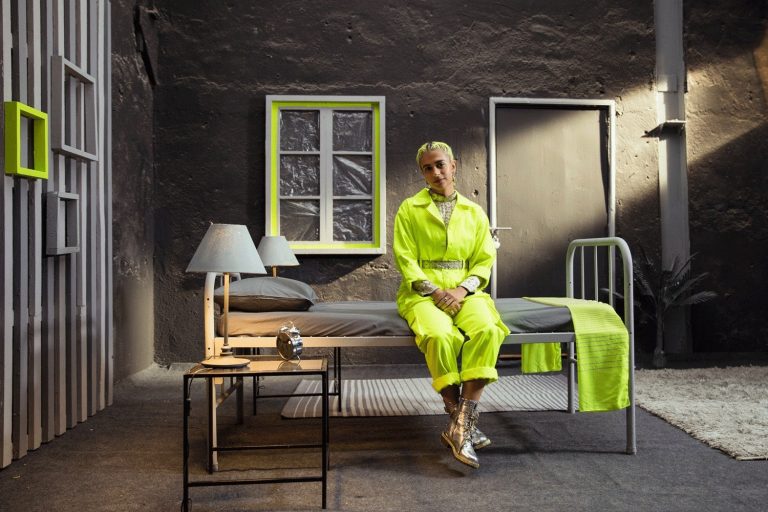 To capture the crushing monotony of schoolgirls as they go about a life filled with rigid schedules, director Misha Ghose chose a construction site in suburban Mumbai; while the forest became her playground to showcase the joy of freedom with a motley crew running around with wild abandon. In the former, everyone looks the same, even moves the same way (a la Pink Floyd); in the latter, each person is dressed individualistically. “This song is about letting go of the shackles that tie us to our everyday routines; it’s seeking freedom that connects us with the earth and with our individual selves. It’s about not becoming one homogenous person like the society deems us to be,” says Ghose, whose previous work for Indian band Parekh & Singh elicited comparisons with Wes Anderson, and even won a nod from the American auteur himself. Ghose is part of the all-female team that drives this video, and the camaraderie is unmistakable. “We wanted to challenge the idea of ‘the female muse’ by creating new codes of femininity in a music video that does not appeal to the ‘male gaze’,” says the stylist Indrakshi Pattanaik, who mixes designer pieces with vintage Indian saris in the song.

Pairing Adidas sneakers with a traditional lehenga, Gandhi manages to live up to her signature hypebae-in-comfortwear image. After all fashion, for her, has always been a form of self-expression and she continues to use it to that end.

Like her, the cast of ten is filled with members who are secular, diverse and idiosyncratic. Amidst a group of queer, trans and gender non-conforming people is transgender radio jockey, Shanthi Muniswamy and Indian illustrator and activist, Priyanka Paul, who goes by the name Artwhoring.

“I wanted our cast to feel authentically part of our circle, rather than feeling tokenised. I wanted to bring in folks whose work I, or the rest of the team, already follow and are genuine fans of,” says Gandhi, an LGBTQIA+ supporter, who has been hosting discussions about gender liberation on her Instagram during Pride Month.

“Indrakshi Pattanaik, Kanika Karvinkop (of the Mumbai vintage store No Borders) and I wanted to style each girl in a way that celebrated the rich history of Indian fashion, while still ensuring their authentic identity,” says Gandhi, who has collaborated with 14 homegrown brands including NorBlackNorWhite, Rajesh Pratap Singh, Kanika Goyal, Kichu and James Ferreira. This is not the first time she has enlisted local brands. In 2017, Gandhi first partnered with athleisure brand, NorBlackNorWhite during her debut India tour, to raise awareness about rampant sexual assault against women in India and around the world. Once again, she revived her connections with the Delhi-based brand for a collection of T-shirts, jumpsuits and silk dresses that can be spotted in ‘Young India’, a song the Harvard graduate wrote critiquing the elite education system. You can always count on Gandhi to be that rare kindred spirit that connects not just brown girls around the world, but every feminist we know. Even pre-pandemic, when she was touring as part of Oprah’s 2020 Vision: Your Life in Focus, the rapper was performing a musical catalogue that doubled as a manifesto for gender equality and a reservoir of protest songs.

And there lies her appeal—her problems may be American-Indian, but they resonate with women the world over. The bleached blonde has never seemed too concerned about flouting societal norms. In fact, most of her decisions are with the intent to challenge and disrupt existing biases. At age 24, when she took on drumming duties for Sri Lankan musician M.I.A, her hi-hats filled in the gap in a profession largely seen as male. In 2015, when she made global headlines for free-bleeding at the London marathon, she was driven to break the taboo around menstruation. And now with her solo project, the Sony Music Masterworks artist continues to provide fodder to fuel a new generation of feminists.

As a person of colour, living through these tough times, Gandhi cannot separate her music from the interconnected social justice movements happening around the world. She views ‘Waiting for Me’ as a call to action—to question norms, reject colourism and return to nature: “This song is a global protest anthem that is about moving from the individual to the collective, from the mundane to the colourful, from oppression to liberation. And I hope it serves as a form of healing and of inspiration in these globally revolutionary times,” says the musician who has been participating in protests for Black Lives Matters every week in her home state.

By Megha Mahindru for Vogue