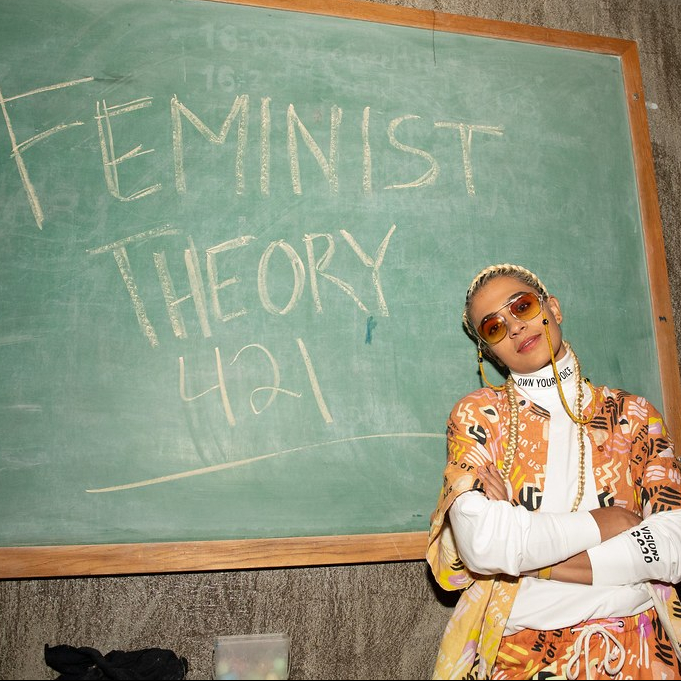 By Dusty Henry for KEXP

Iceland Airwaves is renowned for breaking new Icelandic music, but for bringing in acts from all around the world. Our second day at Kex Hostel represented the diverse array of music and nations with acts at the festival – from American feminist hip-hop and Finnish post-punk to teenage Icelandic punk and a fiery slowcore act with members from all around the world. In the span of a day, KEXP and our listeners were treated to a little bit of everything for a thrilling day of new, forward-thinking sounds.

First up was Madame Gandhi. If she looks familiar, you might have seen her drumming for artists like MIA, Lizzo, Kehlani, and Thievery Corporation. As impressive as that sounds, that’s just one of like a million other incredible facts about the moniker of Kiran Gandhi. Some of her accomplishments: she triple majored in political science, women’s studies and mathematics at Georgetown University; got her MBA from Harvard; became the first data analyst at Interscope records; garnered national attention when she ran the London marathon while bleeding on her period as an act of protest; she concepts all her own videos; and I can just go on and on.

Activism and music intertwine seamlessly in Madame Gandhi’s music, with feminist ideology strongly at the center. Going to a Madame Gandhi performance is part dance-party, part TED Talk – and it works! While she does often perform with an ensemble, she went solo for her set at Kex hostel which served well to highlight her many talents. Throughout her performance, she’d jump between a drum kit, beat pad, and owning the stage with her yellow microphone.

Her electrifying beats boomed through the speakers as she ran through songs from her latest EP, Visions. Commanding the stage by herself, she also commanded the crowd while ensuring an inclusive experience for all in the room. Throughout her set she’d take breaks in between to talk about the inspiration and ideas behind her songs, like opener “Waiting For Me” in which she describes loving hip-hop music and beats but questioning the lyrics and not “wanting to turn up to the sounds of my own oppression.” Her goal is to write bangers that change the narrative of pop music and you can feel that in the rapturous “Top Knot Turn Up.”

Madame Gandhi’s set was a great segue into Icelandic punk trio GRÓA. While the two acts couldn’t be more sonically different, the rebellious spirit transcended both performances. GRÓA’s members are all still teenagers, quickly rising as a must-see act in Iceland with their mangled riffs and fierce screams. A part of Iceland’s post-dreifing collective, they are very much in the spirit of the country’s DIY movement.

While the band members are high school age, their sound feels rooted in the grimy punk that came decades before they were born. But there’s something undoubtedly new and exciting about the band. For a group who has only recently started playing punk music, they bring fresh and exciting energy to the genre. The spirit of teenage rebellion effuses through their erupting distortion and devil may care attitude.

The energy of the day only kept going up as Finland’s The Holy took the stage. The band first started after a drunken conversation during the 2014 FIFA World Cup, uniting on an idea to make music that feels massive and enormous. Because their music is exactly that – massive. Every element of the group is pushed to the max, right down to the fact that they have two drummers.

The raging guitar licks and bone-rattling bass riffs are akin to musical explosions, pushing out through the speakers like a riotous sonic boom. But even the fray of their sound, there’s an overlaying feeling of hope. It’s a blast of triumph, not a squall of defeat. You see that in the band’s performance too as they throw themselves across the stage with reckless abandon. As a band of friends, you could feel their kinship emanating between them.

The packed crowd at Kex only elevated the energy even more. The cramped masses stood in awe, reveling every time a member jumped off a bass drum or thrust themselves into an earth-shattering guitar solo. The band’s latest record Daughter does a great job of capturing their spirited sound, but The Holy are truly a band that needs to be seen to be believed. Catch them live and you’ll surely be awestruck.

Rounding out the day was another thrilling new Icelandic act, Laura Secord. I first caught Laura Secord last year at the R6013 house venue in Reykjavik. Since then, the band has released their debut album Ending Friendships. Though the title is a bit ironic, given the strong, loving bond between the band members.

Fronted by Alison MacNeil (whom KEXP listeners may remember from the band Kimono), Laura Secord taps into a guttural brooding with melodic hooks that will rattle in your head for days. MacNeil leads the band with magnetic stoicism, adorned in black with a gaze toward the ground while she shreds sensationally. Drummer Ægir Bjarnason walloped his drums with superhuman force – if you were just listening to just the broadcast you might have guessed Laura Secord had two drummers.

The band only picked up more steam as they went, the heads in the crowd bobbing methodically alone with every dirge and breakdown. What makes the band’s music great though is the heart behind it all. These songs, which MacNeil later told me were somewhat about “ghosting” and losing touch with people you once considered friends, carry the weight of loss and looking for a respite from the emotional burden. As such, the songs are deeply cathartic – I assume maybe for the band, but even more so for the listeners. This is one of the most exciting bands coming out of Reykjavik right now and this set only doubled down on that fact.