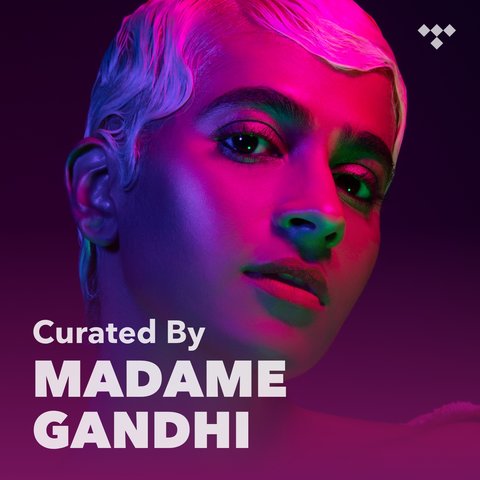 By Kiran Gandhi For Tidal

You may already know Madame Gandhi (aka Kiran Gandhi) for her percussion-driven electronic sounds intricately woven with powerful messages that uplift the female voice. You may also know her as revolutionary artist M.I.A’s former drummer. But what you may not know is where she developed her passionate spirit for celebrating womxn and femmes. Her new EP, Visions, is a manifestation of many years of that energy flowing into not only her music, but the way she approaches each day. Madame Gandhi gives TIDAL a special treat with a track-by-track breakdown of her inspiration for Visions – from her upbringing and pop culture revelations, to being present and positive in a chaotic world and working with producers who nurture her creativity.

Lessons from Self and Family

My intention with Visions was to build on my first short-form album Voices, and create a project themed around looking inward in order to envision a more positive future outward. So often we think that the solutions to our problems lie outside of us—we scroll through social media, Google for answers, read books, look to astrology. But the truth is that my best moments of inspiration, that have led to manifesting my biggest goals, have always come when I have taken the time to look inward. To ask myself what matters to me, what’s most important to me, what would create happiness and harmony in my life, what would allow me to be a better human to others and serve a higher purpose.

My mom often taught my brother, sister and me that “guilt is a wasted emotion.” By this she meant, we can’t help where we are born, but we can help what we do with our privilege. Moreover, what would our world look like if each person used the passions and activities that gave them joy, and channeled them towards a purpose that made a difference in the world? If we fueled social change by channeling the things we would be doing anyway, when no one was looking, towards a greater good, we could all be responsible for positive impact in our own respective communities. Sometimes social change can be deeply overwhelming, sometimes we aim too high. I was always taught, how can we create change in our own backyard? How can we take responsibility for our own sphere of influence, whether it’s one person, or a family, or a friend circle, or an office or school?

Images in Music, For Better or Worse

As a kid, music influenced my life and my views and my identity in the world more so than anything else. I remember loving Nas and other 90s hip-hop growing up in Manhattan, because it developed my sense of empathy and taught me about other’s way of life in the world. I loved dancing to the music, memorizing the lyrics (even the bad words behind my parents’ back!) and knowing all the names and songs on the top 40 charts that week. Sometimes when I’d see the music videos for certain songs though, I remember feeling intuitively that so many of the womxn and femmes represented on the screen are so reduced to their sexuality, rather than being depicted for the multi-dimensional beings that womxn and femmes are. I remember feeling what I saw on screen didn’t match the reality of the extraordinarily powerful womxn I grew up with around me.

When the Spice Girls came, my life changed. For the first time, I felt like I was represented on screen! I could be anything I wanted to be. I could be sporty or scary or cute or bossy. I collected all the merch, knew all the tour dates and songs, choreographed countless dances, watched all their interviews. I was living in Mumbai, India at the time, and would cut out any article in the local newspapers related to the Spice Girls! I just loved them so much because their existence in the world instilled in me a sense of personal power I had never accessed in myself before. And it was this moment, this feeling, that would later shape the course of my life’s path and mission today. To use my own art and talent to combat gender stereotypes in music and media today.

The Road to Visions

And so, approaching the year 2020, I present to you Visions. The second installment of my short-form album trilogy, that explores themes of fourth-wave feminism, redefines aspects of modern femininity today, celebrates the nuance of gender-fluid love and ultimately aims to deliver joy and inspiration to anyone listening to strive to be the best version of themselves in order to serve humanity. Here’s a breakdown of my process for each song:

This first track is an ecofeminist anthem about valuing what female and gender nonconforming people have done for the earth and humanity and also valuing nature and living as one with it. This song criticizes corporate greed as an opposition to these energies. I try to take the power back with this song by explaining that we have a choice to be informed to live freely, using the metaphor of literally living in the jungle. At the end of “Waiting for Me”, I sample the sounds of children in classes in New Delhi India where my family spent a lot of time when I was growing up, as well as a sample of my mom meditating at the top of the track.

My intention with this song was to take a baile funk Brazilian trap beat, but put lyrics over it that still made you feel like a boss without contributing to the oppression of someone else. I find so often when I am working out, I am listening to so much trap music. I love the beat, but the lyrics are so misogynist, and I don’t want to feel like I have to turn up to the sound of my own oppression! So I created a song about tying your hair up and getting your work done, which is a call to action many femmes I believe can relate to.

This song is about falling in love in a healthy and positive way by working through personal demons and finding love as a source of freedom. I’ve been inspired to create a downtempo tribey trip-hop love song, and collaborated with the talented producer Caleb Stone in Detroit. We spent all day making music and recorded drums in an abandoned church, which is now a studio called Assembled Sound. This process of dedication to the music informs the song about seeing a relationship through, developing it and nurturing it rather than a quick swiping left or scroll. It’s about seeing consistency as the new social currency, rather than moving through experiences so quickly without going deeper.

I brought back Anthony Saffrey who is featured on my Voices EP. He has always been a mentor to me, and his wife runs a feminist punk venue in Boston called Once, where I have performed many times. “Young Indian” brings in a psych-rock sitar mentality and sensibility mixed with a hip hop and feminist vocal attack. I see it the “empath’s anthem” in a way, on my record. It is also a direct critique of my time at Harvard Business School and Georgetown University, which I found to be the breeding grounds of the capitalist patriarchy as we know it!

This song celebrates starting with changing yourself if you want to serve humanity and have a higher purpose, and effect change in the world. “Bad Habits” is inspired by Fela Kuti, the Nigerian vocalist and activist in the `60s and `70s, who would speak out against colonial rule of Nigeria with the most incredible big bands playing the sexiest, elevated and uplifting music behind his lyrics. I took my own vibing to this incredible artist to the next level when I linked up with Zach Witness, a young queer producer out of Dallas who produces another inspiration, Erykah Badu. We recorded in my studio in LA and vocals in London, actively working on this song, as our lives continued to happen and splice the process.

For TIDAL, I made this playlist that lists each song on the album, followed by a few of the tracks and artists who inspired the song. I hope you enjoy listening to it as much as I enjoyed making it.