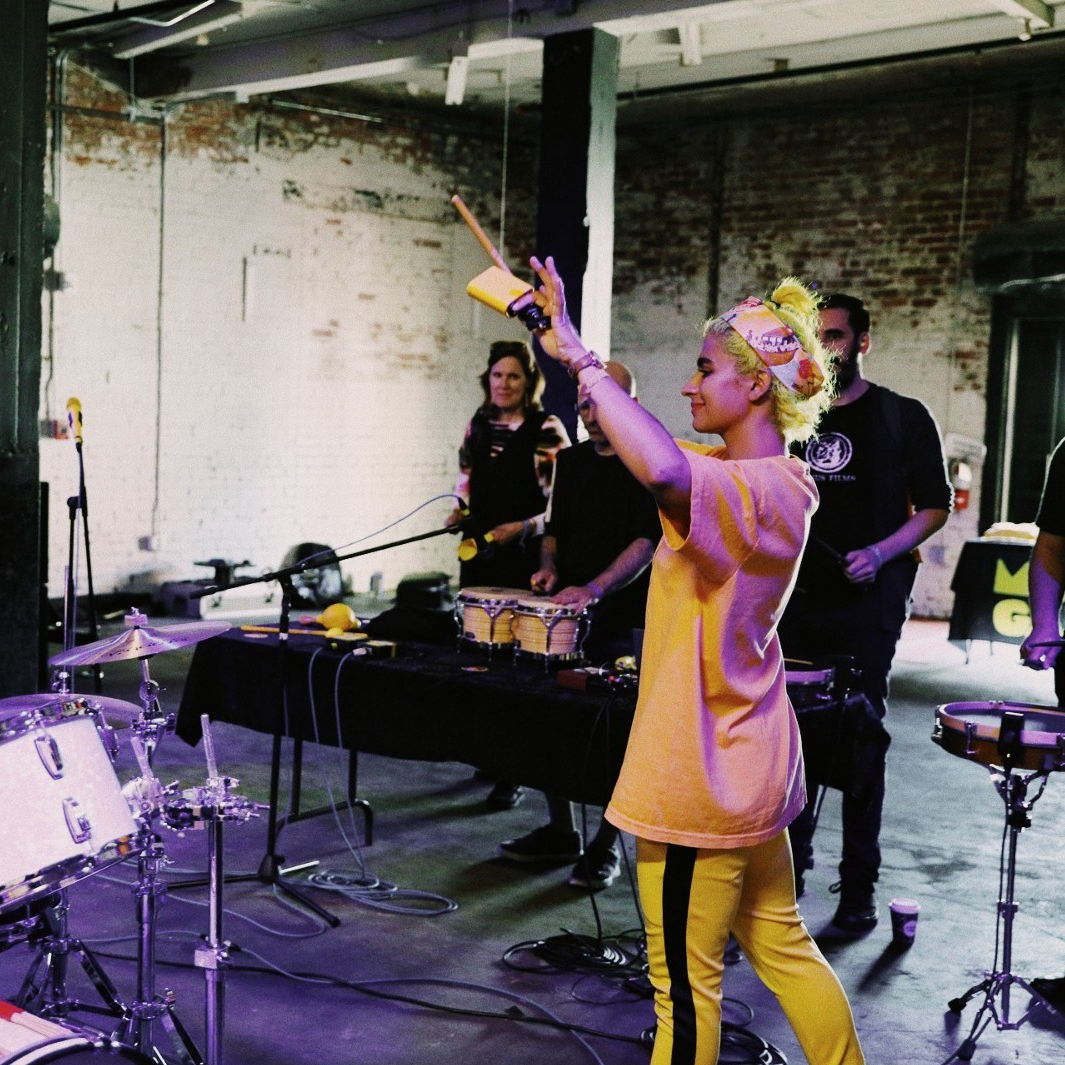 By Andrew Cheek for Medium

By chance, our paths crossed at a long communal table over chips and queso shortly before midnight. She was in Durham, she said, at Moogfest as I was too and she was hosting a few workshops and a communal concert during the weekend-long festival.

Her name is Kiran Gandhi, or, Madame Gandhi (her stage name). She is a a drummer (and has played for M.I.A. and for Kehlani), she’s a public speaker and activist, went viral when free-bleeding on her period during the London Marathon, and centers her work around celebrating and elevating the female voice.

“We have, as a culture, to not mistake kindness for weakness. I think we associate that kindness and that unconditional love even with maternity and motherhood. Sometimes as a culture we take that for granted, even though love is the very thing that’s keeping all of us alive and is actually the very thing that each of us is so desperately seeking.”

Andrew Cheek: Can you describe the nature of your work as an artist and an activist, and maybe touch on briefly what the message is you’re spreading through the world?

I enjoy using my public speaking and my live performance to share all these ideas that I’ve had for many years about where we are in, sort of, this fourth wave of feminism; [my ideas about] about bringing people together; about valuing emotional intelligence over brute force aggression; valuing collaboration instead of competition; and really trying to live in a world that, as Gloria Steinem once put it, is linked and not ranked.

Andrew: How have you witnessed that message coming alive in the world? I.e., how you’ve noticed the actualization of change and of social progress, because being an artist can feel isolated sometimes.

Madame Gandhi: Yeah, I think that is true. Being isolated when you’re actually working on the music and on the performance and on the speech is very isolating.

Even just before this interview I was home solo for a couple of hours preparing a DJ set that I’ll have tonight in Santa Monica.

And, I think the reward is so big that the loneliness and the moments of self-doubt or boredom — not boredom — but just feeling like you’re lazy almost because you’re not constantly constantly creating, that can feel very self-defeatist.

I think the look on on people’s faces, the feedback I get, the direct messages I get in my social media after I talk, all of that makes it so worthwhile. I feel like I’m doing my best work when people give me the feedback that they feel inspired, that they feel joyful, that they have left a toxic situation, that they are trying to be their best selves, that they are owning their own voice in their own communities, that they’re starting collectives that make change for the better in their communities…. these are the different kinds of things that make me feel like I’m doing the work.

I gave a show in Denmark, actually, and there was someone in my audience who said “Madame Gandhi, until your show I had been holding off for many years to run for parliament but now that I’ve seen your show I’m going to do it, I’m going to run.” And she ran two years ago and got elected, and it was an incredible feeling and story to be one small part of her journey to make change in her own country.

Andrew: One tricky thing for artists and especially up-and-coming ones is getting beyond your personal network and bubble. It’s important to build your brand, and to use social media and the internet to further tell your story and connect…

What tools or new media are you using as an entrepreneur in the arts to tell your story in a way that retains your authentic self?

Madame Gandhi: My merchandise! I love — I think maybe you glanced at it for a second when you came by the jam session, but — I love having a merch table that people get excited and inspired by. One that’s really cute and colorful and joyful and physically looks like an embodiment of the aesthetic of the project.

I love clothing, I love fashion, I love personalized things, I love yellow things, I love branded things, I love things that look collectively thought-out and intentional, and I definitely think that my merch is a way to get the message out in a way that’s fun and self-expressive for my audience.

Andrew: You have a song called “Bad Habits,” and on your business card you wrote the lyric “All My Bad Habits Have Got to Go.” How do you define or identify those bad habits, for us as individuals as well as in a cultural sense?

Madame Gandhi: I think some of our bad habits as a culture are that we put each other down all the time! We think it’s cool to insult each other, and I hate that. I was super bullied, not even by boys, but by other girls, as a kid and then later in college definitely more by the boys and by the men in [some of] the music communities.

We have, as a culture, to not mistake kindness for weakness. I think we associate that kindness and that unconditional love even with maternity and motherhood. Sometimes as a culture we take that for granted, even though love is the very thing that’s keeping all of us alive and is actually the very thing that each of us is so desperately seeking.

So we have to remember that we need to value love when we see it, because it’s the very thing we’re trying to get. And we also need to try to be love. I think the bad habits that I have are related to that, where, there might be times when I’m not eating super clean or I’m not following my bliss or I’m not following my own boundaries knowing something that would give me joy and then I’m not actually doing it.

Andrew: How do you think we can shift away from bad habits into ones that are healthier?

Madame Gandhi: I definitely try to be physical at least once a day. Minimum. Whether that’s for twenty minutes because that’s all I have, like at Moogfest we did a twenty minute run and I was so glad that we did that. Ten minute shower, twenty minute run, that’s a thirty minute workout end-to-end, and I was so reenergized after a super long day and had more stamina. I remember doing the ninety-minute yoga at Moogfest, that was an incredible ninety minutes that I carved out for myself and was so grateful for afterwards. My body was so tight from all of the travel that it made a huge difference.

I remember also times when I’ve gone on long runs during my travel, and I always feel so empowered and proud of myself like, wow, I’m really out here working, performing, traveling, and still being able to take care of myself.

That feels really powerful. I also try my best to scout out the places that I can eat clean in different locations whether it’s the vegan joint, or it’s the smoothie place, or the fair-trade coffee shop that has super clean coffee. Things like that make me feel really good when I’m on the road.

Andrew: I read this question in an interview on your website but if you don’t mind I’d like to ask you again because it’s such a powerful question: What does the phrase “The future is female” mean to you in terms of howe we, as a collective society, need to shift?

(This interview was edited lightly for length and clarity.)