Earlier this month, I attended Snapchat’s Snap Partner Summit. It is a one-day, invite-only conference where CEO Evan Spiegel and his co-founder Bobby Murphy, along with other major players in the tech industry, took the stage to discuss how Snapchat plans to evolve as a global company and how it seeks to promote meaningful collaboration with both their partners and their users.

After spending the day walking through the spacious lot littered with sleek white screens promoting flashy new video games, augmented reality stations and a “create your own life-size bitmoji” booth, I couldn’t help but think how extra all of this is.

Do we need more random hectic-looking video games? Do we really need to use an app to print life-size dolls of ourselves in a bitmoji form? I understand that culture participates in this, that this generation finds joy and entertainment in these products. There’s nothing wrong with entertainment or video games. In fact, it’s kind of amazing that as a country we are in such a luxurious position that we can afford all of this. But it is important to emphasize that we are in a powerful position, and with this power comes immense responsibility to our communities both at home and abroad.

Technology has changed the way we communicate with one another. For those privileged enough, technology has facilitated how we work, where we work, and our day-to-day tasks. Recent advances in technology have allowed us to up-end traditional methods of education for new practices that are more inclusive and suitable to our unique population of students and those who want to learn everywhere. From those with disabilities to our thinkers and healers in the healthcare industry, technology has become more than just a form of entertainment.

And there is still so much to do. There are so many ways we can use this force to transform our communities for the better. And I don’t have all the answers but I invite anyone reading this to brainstorm and collaborate with one another and to use tech as a weapon for social change.

For me, technology has allowed me to connect with people all across the world who share my message of elevating the female voice. I use it to teach feminism and to enter virtual spaces with individuals who have contributed to my learning. I use technology as a tool to inform myself about the occurrences of our world but in this form of witnessing, technology has heightened my pain for the many parts of this world that continue to suffer in silence.

We don’t need to be promoting life-sized bitmojis all around the world. Down the street, in Skid Row, people are dying and we drive past it every single day. It would be so interesting to see a company like Snapchat consider their social impact level. I understand that we live in America and everything is about the capitalist patriarchy and making ridiculous sums of money that’s not sustainable. But in order for a company like Snapchat to leave a legacy, and for it to be a global player, there has to be a social awareness.

At the conference, the rhetoric on the stage was centered around how Snapchat has captured the 13-24 year old market in predominantly white and wealthy countries like the United Kingdom and the United States. First of all, that says enough onto itself. And that is that the target audience are not those who’ve survived epic natural disasters, or those who live in cities with little infrastructure and schools with barely the bare minimum. But also, great, so the next generation of kids are going to just come out as complete zombies who have learned narcissism and how to play video games while they were in school. 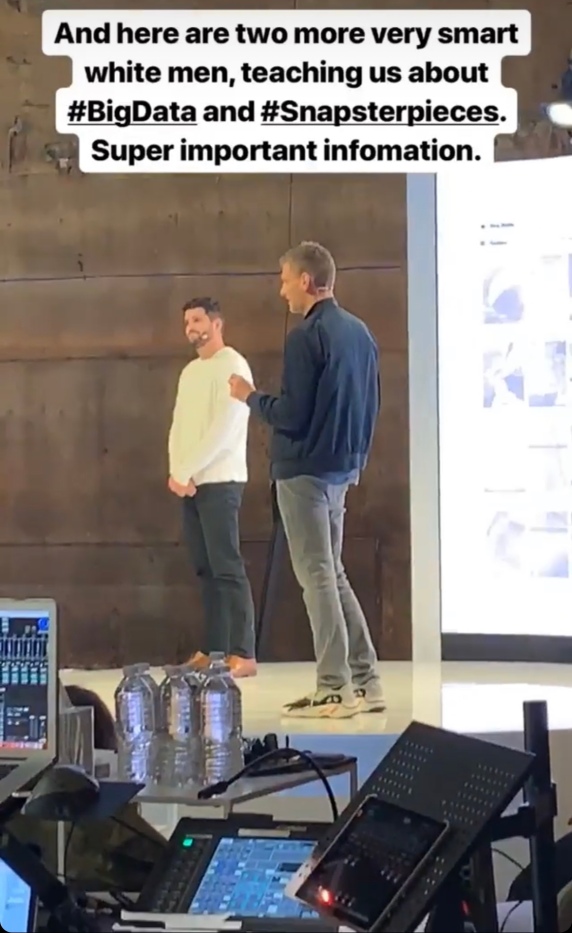 For example, they were talking about how they have this live reality show where they have freshmen from different schools log in to Snapchat and document their day at school. And my first honest thought was wow, this is literally evil. Please don’t do that. Please, at least do that to grown adults who can take advantage of fucking up their own life. But don’t put it in the hands of kids who will use your product and not learn anything. It’s so evil.

How sick would it be if Snapchat said instead, “Hey we’re going into schools and teaching kids not only can they use technology to communicate with each other, but they can use it to become future leaders, to teach each other, to share their lives with each other in a positive and healthy way.”

For all 40,000 of you who follow my work, I don’t like nor do I tend to go on rants. I try to be analytical and thoughtful with the issues that I’m criticizing. But sometimes things are so jarring and problematic that there doesn’t need to be much analysis; it’s obvious. See, if you’re delivering darkness, the people will eventually catch on. And if you’re delivering real good value, you wouldn’t need to orchestrate these fake bougie conferences to win people over. 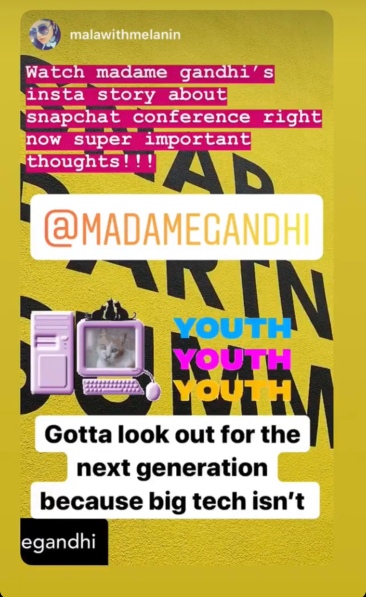 Inherently, technology is just is. How we define technology in terms of good or evil is dependent on us. To nuance this issue, there is nothing wrong with utilizing technology for pleasure and entertainment. I think that’s very human and I’m in awe of the magic we’ve created through tech. But with this magic, we now have a space where the possibilities for how we can reimagine our world is vast. So, how can we reimagine technology to be a force for social justice? How can we place basic human awareness at the forefront of tech? How can we leave a legacy that we can be proud of?