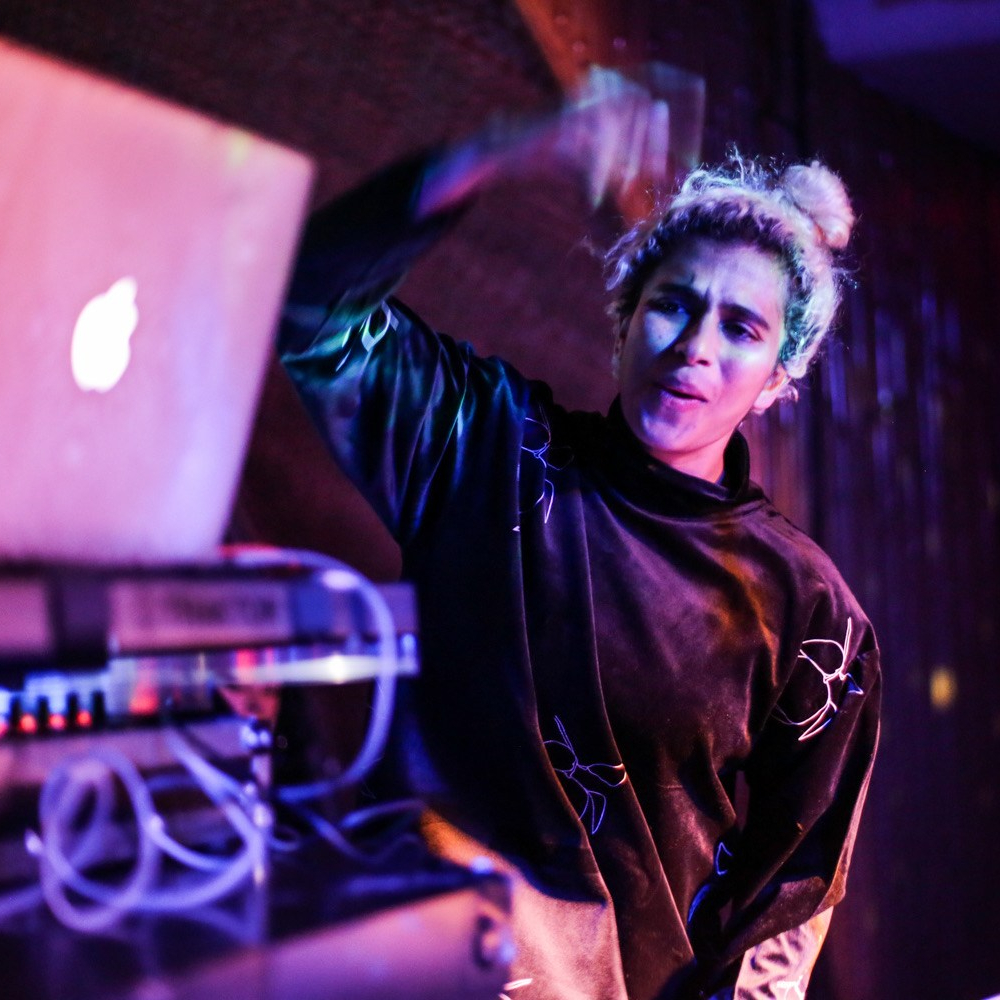 Los Angeles-based electronic musician and activist Madame Gandhi (the alias of Kiran Gandhi) has revealed her new single ‘Top Knot Turn Up,’ on which she partners with Brazilian trap artist Ruxell. Madame Gandhi, who first gained recognition as the free-bleeding runner at London’s marathon, released her debut Voices EP in 2017, followed by a remix EP last October. Having gained recognition as the former drummer for M.I.A., Madame Gandhi writes her own electronic music that elevates and celebrates the female voice. Madame Gandhi creates songs featuring her signature drumming, vocals and percussion, backed by the intricate electronic soundscapes developed by her collaborator. Madame Gandhi has been praised by publications varying from New York Times, Vogue, BUST, Rolling Stone to FADER, Vice, i-D, and Cosmopolitan for her eclectic sound and unwavering dedication to human rights and the female voice… We talk to Kiran about collaboration, boxing and running…

TSH: In what ways do your talks and speeches feed into your songwriting?

Kiran: I love giving talks and having conversations with people about gender equality and gender dynamics. For many people these kinds of topics can be difficult, but I’m really interested in the process of having conversations with the intention of creating empathy, mutual understanding and to demystify things that can often feel scary or tense, which is how I think about my songwriting. I always think how I can take what I do in my speeches and in my work as a thinker and speaker and put those ideas into my music.

TSH: Are you leaning towards certain types of subject matter?

TSH: A primary incentive for you is to reform the music industry and make it a healthier place for women and girls?

Kiran: Definitely. I do this by speaking about certain topics, writing about them and then embodying the ideas into the music. It’s also beneficial to be the change and show what it’s like to lead from the feminine, as opposed to leading with competition or trying to exploit other people. I like to get teams together and lead a team of a lot of different women and help projects come to life at a really excellent level. It’s also cool to curate Spotify playlists and incorporate other female artists into the playlist so that we can be our own gatekeepers too.

TSH: Do you often look to collaborate with other artists?

Kiran: It’s always good to collaborate with someone who can bring out the best in you or someone who has great ideas and can therefore move through a song more than you can. I love to work with women as much as possible. I have many female producers that I’ve collaborated with but sometimes there are talented men who I want to work with too. However, I have to make sure that they are spiritually aligned and that they understand my mission and won’t take the credit appropriate for the amount of work they’ve done on a song. In my experience some men are very comfortable doing this and so it’s vital to have mutual respect.

TSH: When it comes to the fusion of genres within your music, what do you mostly bear in mind?

Kiran: I love the idea of having a sound in the same concept of honing your voice. I love it when I listen to a song by an artist and I can tell how undeniably it’s them – either by their voice or the nature of their actual music and the instruments being used. I do try to be consistent in the choice of instruments that I use, that’s why I‘m sceptical not to work with too many producers, otherwise my sounds would be all over the place. I feel my voice and my ideas are very specific to me. I use heavy vocal samples, heavy live drums/electronic drums and percussion. These are the focal points that make my project have a unique sound.

TSH: Tell us more about the origins of your latest single ‘Top Knot Turn Up’…

Kiran: Well, I had listened to so many dope electronic trap and Brazilian Bali funk music and beats, but all of it would have a cover with a naked woman with her booty out or the tracks would be very vulgar and laced with sexuality. I mean there’s nothing wrong with sexuality, but not when it’s at the expense of women and when we are objectified for the sexual pleasure of men, regardless of whether it’s light-hearted and meant for the dancefloor. To me, it’s still oppressive and we shouldn’t tolerate it…

TSH: So you decided to offer your own take on this type of music with ‘Top Knot Turn Up’…

Kiran: Yes! I wanted to flip this way of thinking and aim for a beat that was really good, but I wanted the lyrics to not be oppressive to anybody, but instead I wanted them to be empowering and an anthem for women, as opposed to women just shaking their booties on the dancefloor. We have an abundance of that but what we don’t have is an abundance of woke conscious in trap music. It was great to work with Ruxell on this song because he really understood my vision. He sent me the Abelton stems of the beat that he had made and I spent almost a year writing this song! I would tweak it all the time! There were so many iterations of this track and so much love went into it, which is why it felt like a personal triumph for me when it was finally completed.

TSH: Offering authenticity and honesty as a direct line of communication is really key with your music, especially knowing that it has the potential to change somebody’s point of view?

Kiran: Yes! And that is why we don’t make music with the intention of Spotify streams or commercial gain. My story in 2015 at the London marathon went viral because of the purity of the story. The purity of me personally feeling very shocked that I was able to run a marathon on the first day of my cycle, which for any woman is very uncomfortable. I had this personal sense of empowerment and people could feel the sincerity of the story and connect with it. Similarly with my music I trust that I have to make the best and most honest art I can make and that the people that need it will find it.

TSH: Does running regularly still feel like heaven for you?

Kiran: Absolutely! I run 2-3 times a week minimum. It’s so cool because it’s so effective for me. After the third mile immediately my brain opens up and I start thinking about my to-do list and I think clearly about my music too. It definitely gives me a lot of creative stimulation.

TSH: Boxing must also stimulate and make you feel endowed in various ways?

Kiran: Ha! It does! I do love my boxing so much. My girlfriend is the boxing instructor so I go because I’m in love and because it entails an emotional joyfulness as well as a physical joyfulness. I also really enjoy surfing and eating well too.

TSH: Your mother’s advice is also central to your vision?

Kiran: Absolutely. I spoke to my mom yesterday and she left me with words of wisdom. My mother basically told me that we do everything just to be happy and that I invest so much in the pursuit of my music career. She told me to be happy and joyful about writing music in this moment, which was such a liberating sentiment. All we have to do is optimise for our own joy because it creates good quality work that makes other people inspired. My mom is a constant force of grounding and she often gives me such simple and beautiful messages.

TSH: Is your ethos with your art to attempt to contribute to something that doesn’t currently exist because that’s what you do best?

Kiran: Yes, because as a kid my father was very competitive. I grew up with quite intense Indian parents. Winning the match, getting top grades and being the best was what mattered to them. However, that mentality was bad for me. I never thrived when I felt like I had to prove myself or win against other people. I think that childhood experience shaped me because instead of competing I usually tried to think about how I could be the best version of myself and reach my fullest potential but in a way that is unique to my passion and personality. I’ve never been interested at being the best at playing by the rules within the system. I think we all need to be honest about where we thrive and where we fail. In the system I would fail and feel undervalued, which is why I always want to create something different and operate by my own rules.