We talk to the activist-musician about Brazilian trap, American identity, and why sometimes you gotta put your hair up to get down. 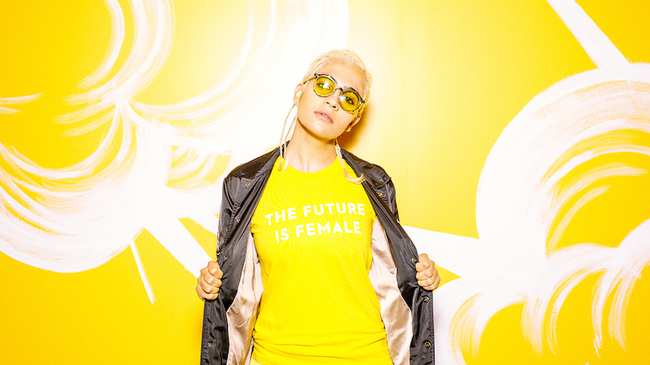 Sun’s out, buns out, y’all. Ahead of Independence Day, musician-activist Madame Gandhi is here with a new banger to remind you that amidst all the dark chaos, the future is still sure as heck female. Today Noisey is pleased to present “Top Knot Turn Up,” a party-ready track from the ex-M.I.A drummer that celebrates all the ladies and others who put their hair up to get down to work.

The song combines a Brazilian trap beat, courtesy of producer Ruxell, and some fat percussion from Madame Gandhi, who layers up her feminist bars on top of it all: “Please do not trouble me when I am focused / The future is female (you already know this) / I’m fighting against the corruption on SCOTUS / Turned up in my top knot since when I first wrote this.”

“‘Top Knot Turn Up’ is this idea of when we as people who identify as women put our hair up in a bun, it sends the signal, ‘Don’t come and flirt with me, don’t trouble me, don’t try to underestimate me,’” Gandhi tells Noisey. “I put my hair up back and it’s like a lace-up, you know? It’s a call to action. Put your hair up in a bun and get shit done today.”

We sat down with Madame Gandhi to talk about the story behind the song, American identity, and getting political on the dance floor.

Noisey: What was the original concept behind “Top Knot Turn Up”?
Kiran Gandhi: “Top Knot Turn Up” was a song that birthed was two years ago. I was playing a show in Mexico City, and I posted a photo of me at the show at the drums, with tons of lighting and hundreds of people in the audience. My friend who vogues for Fka Twigs, whose name is Jamel Prodigy, commented “Top knot turn up,” and I was like, this is my life. Twenty four/seven. I put my hair up in a bun and I get hella shit done. Just like millions of women and people all around the world. The symbolism of us, as women, having our hair down when they go out and we’re on a date, and we’re flirting or whatever and we’re playing our feminine B-side—there is just as much femininity as when we put our hair up in a bun. That’s like, I’m here to report. I’m here to take care of my kids. I’m here to run a meeting. I’m here to play the drums

Even from childhood, my parents used to be like, “Please, can you put your hair down? We ought to see your nice beautiful hair.” And I was like, I would put it down if I wasn’t doing anything, but it looks like 24/7 I happen to be doing stuff! When Trump unfortunately won this election, that’s when I was like, I have to write this song, because we’re actually watching, with the Women’s March, and with the United State of Women that is now happening, and with Michelle Obama is speaking out, millions of women all around the world are organizing and saying, “If you threaten our rights, we’re going to organize.” So I logged this idea of writing a song that was like a unifying call to action. We’re not here anymore to look pretty. We still gonna look pretty, actually, when we put our hair up in a bun. But I just thought no one has written a song about this part of the female experience, which is so relatable, you know?

Totally. Let’s talk about your choices with the album art.
I wanted it to be irreverent to the American flag. The more I travel, the more gratitude I have of certain kinds of freedoms that being American enables me, especially as from an immigrant family from India. They value this life for us. But I also see the enormous criticism that I have of living with irresponsible wealth and power and privilege, and using our power exploitatively against the rest of the world and using privilege to elevate ourselves at the expense of others. And these are aspects of the American brand that I don’t subscribe to. So the album cover sort of references the American flag. And then my actual bun is turned up and spray painted. It has a female symbol in it. It has lots of triangles in it, because to me triangles represent our anatomy.

It’s funny because as we’re getting more into this, I realized I’m unconsciously putting my hair up. Like I’m focusing more. Long hair obviously isn’t specific to women-identifying people, but I love the up-or-down as a representation of the spectrum of femininity, and of gender. Sometimes it’s not just a convenience thing, but like look at my face .
Yes! Exactly. And on a more nuanced note, it’s a bit of like performing gender at different times. We might get told we “look like a boy,” as if that was the worst thing ever. But actually a bun is the most feminine thing. To be like my bun is up, I’m in the workplace. If my hair is down, I’m here to party. To me it was always a signaling effect.

Can you talk a little more about the lyrics?
I wrote the lyrics on the cover of the album as well, because I liked the idea of the record cover also being a journal entry. The thing that makes me a good public speaker is that I’m very cerebral, but that often times can be a mouthful for when you’re trying to write a turn up song. So I remember being like, how do I say what I want to say? Not being so cerebral about it. I don’t know if we achieved that all the way because I am who I am. But the song, the lyrics were really carefully written over the course of a year. And when I would perform the song live, I would try out different lyrics to see which ones resonated.

And what did you find from that?
It used to be some other more cerebral, heady lyrics, and then I changed it to hit all of the rhythmic elements of the beat, as a drummer, and with my words. And that just got people more hyped. That’s what you want—more people to start their day like fuck this day, I wanted them to listen to “Top Knot Turn Up” and be like, yes, today I’m changing my life. You know?

How does rhythm plays into the delivery of a lyrical message or ideal for you? People can be wary of lyrics that are too “on the nose,” so how did you think about what would make this song effective and make it hit?
The beat that I chose was a collaboration with a Brazilian trap artist named Ruxell. I had been listening to Brazilian trap music being like, this music goes so hard, you can’t help but dance when you listen to this. I wanted to take a Brazilian trap song, but not have the artwork be like, a female ass, and like the music being like “Come fuck me.” Cause that’s the lyrics of a lot of Brazilian trap music. So my main thing has always been like, damn, I want to turn up because all this music is so good, but I don’t want to turn to the sound of my own oppression.

So instead I was like, what if we take the same concept where the beats are amazing, and we write something that’s a little bit more honest to the female experience and we get to turn up, and not in a way that is to misogyny, but instead to something celebratory that a lot of people experienced, right? So I partnered with Ruxell, who is an amazing Virgo artist, a young up-and-coming producer in Brazil, and he sent over the original sketches of the beat and then I took that and just added a lot more and fattened it up with my drums. There’s three layers of drums in it and that are added, plus live vocal percussion and then actual bongos and cowbells, and then my lyrics. I want to give this as as a gift to my audience to say here’s a really danceable, fun rhythm, but we’re not talking about assess and fucking only, we’re talking about something nuanced in the female experience. And not that rapping about fucking is bad! It’s just that most of the time when they’re rapping about sex, it somehow ends up being at our expense. It’s not like a joyful portrayal of sex, it’s a violent portrayal, or a very vulgar portrayal of our sexuality.

Did you have any concern about how the song’s lyrics might be received when you were writing them, or how they’d fit with the style of the music?
I wrote and I almost changed this line, but I kept it: “This is a song about getting the work done / Hair up in a bun, that’s the most fun / Hearing myself think when I go for a run / Or maybe I’m practicing the drums / Or maybe I’m writing in the sun.” And I wrote those lyrics like, these are very cerebral. But to your point, I think that’s a very feminist concept. Virginia Woolf used to talk about a room for one’s own, just spending time every week alone. And I think as women, with social media culture, we feel insecure to just be in our own energy, like as if we’re missing something. Well, what if we were actually the best thing going on? Just be with your own energy! So I kept that idea in there because I was like, this is important for young people of any gender to be like, “I’m dope. If you want to have dinner with me, you should be so lucky. Otherwise, I’ll just have dinner with myself, I’ll run with myself. It’s fine.” And that’s radical.