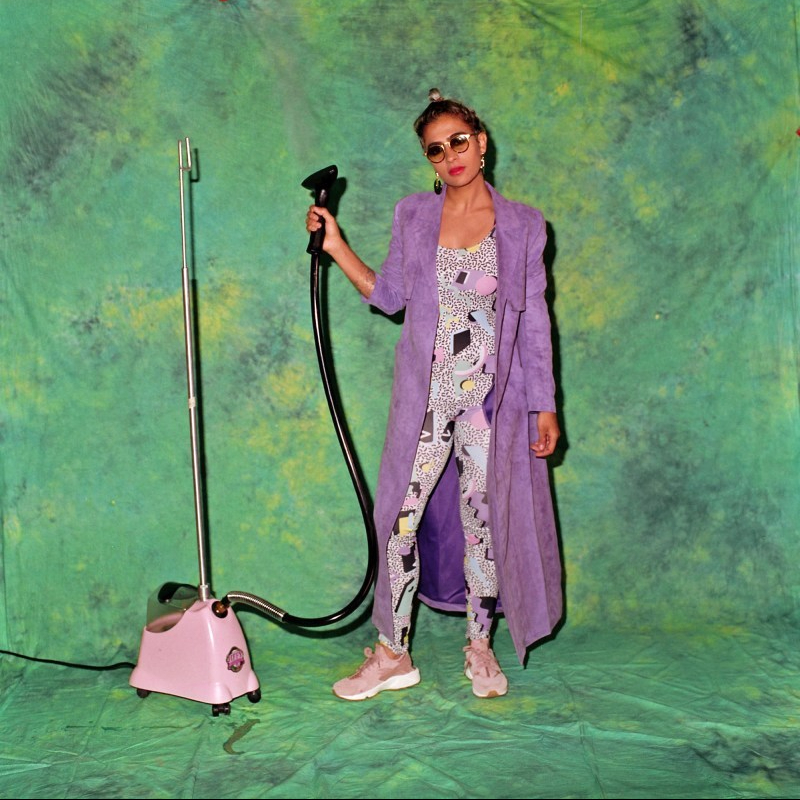 By Chiara Mingione for Nasty Galaxy

“Throughout time, we’ve counted on a small number of community leaders to push things forward, break perceptions, and bring change. And ladies, the past two years have been pivotal. We’ve seen–and struggled with, and spoken out against, and called shit out on–issues that have been pressing, and still continue to press womankind. It’s change that we want to champion throughout this month, while celebrating those who are propelling us into a far better future. So throughout March, we are focusing what matters to us most, right now: groundbreaking, culture-shifting, era-defying, and straight up goals women.”

Insanely brilliant, fiercely passionate, and ridiculously talented, Madame Gandhi is making history. You may recognize her from the 2015 London marathon when she free-bled her way across the finish line, causing the most commotion we’ve seen in menstrual stigma ever. Today, Madame Gandhi celebrates the female voice, inclusivity, and equal rights through her sonic illustrations. Her dynamic lyricism and powerful electronic beats transcend oppression and (literally) give women a voice. We sat down with the artist—and snapped some cool pics in her Gazzy jumpsuit—to talk female empowerment, changes in the menstruation dialogue, and the future.

You’re an incredible musician and equal rights activist—how did it all begin?

As a kid growing up in New York City, I remember being doled into pop culture—whether it was being up to date on all the newest songs, music videos, or Disney movies. But I always felt like the girls who were represented in mainstream media didn’t resonate with me. I tended to resonate with the boy characters more because they were either the central focus or the subject of their own storyline. Often times, I felt like the girls had to be saved and I didn’t like that. I had two parents who really empowered me and raised me to be very independent. I also went to an all-girls school where I was used to seeing really fierce, independent young women doing their thing. I think it was at that early age where I noticed intuitively that there was something off with the way we construct gender roles in our society.

Your music showcases powerful feminist lyricism. What inspires it?

I take the ideas I have on culture and fourth-wave feminism and put them into my music. I have a line in “The Future is Female” that says “We’ve been bleeding each month til we gave birth to you.” Women give life—there’s no need to shame our bodies. The very anatomy that we get oppressed for is the same anatomy that enables life.  Another song I have is called “Her” and one of the lyrics is “If you feel see it in the air, then appoint her.” What I mean is that if you intuitively know that this is the best person for the job, give it to her. Unfortunately, society allows their prejudice to get in the way and jobs are given to those who they’ve seen do the position before. The concept of “Her” is to put your bias aside and hire the right person for the job—otherwise, we’ll just start our own entrepreneurial endeavors and take our talent elsewhere. I encourage young people to leave when they feel like they’re not getting the recognition they deserve at their companies.  I don’t think participating in your own oppression is worth it. I was lucky—I worked at one of the biggest record labels in the world and I worked for a female boss who was very forward-thinking. I stayed there for 2 years and I moved on to get my MBA at Harvard. Instead of keeping me, my boss supported my decision to go and wrote my recommendation. Young women experience a lack of sincere mentorship in their industries—it’s not okay. We need to step into our own power and put our talent where we feel it’s deserved. I take these ideas and put them into my lyrics, and that’s what you hear.

What changes do you hope to see and make in the music industry?

I’m really interested in encouraging women to double down on their own skill sets. I’ve spent the past 4 – 5 years increasing my own music production ability so that I can produce my own music. I’ve learned basic recording techniques so that I can record my own drums and vocals, music theory, and the ability to run my own business. I went to business school and I worked at Interscope so that I could understand how the industry works and so that I could use that to run my own music project. I’m really interested in us, as women and as people in the marginalized communities or people who have varying gender identities to invest in our own skill set so that we can control our own destinies. Right now, only 10% of songwriters are women, only 4% of filmmakers are women, and only 3% of music producers in the world are women. That means that all the music getting made (for the most part) is by men. Even if they’re writing about women, it’s through their perspective—not through the first-person female narrative. We have to own our own voice and that’s what I want to see happen more of in the industry. Young people and young women feel motivated to invest in their own skill set if they see other women doing it. The irony is that for how feminist I am, it didn’t cross my mind that I might be able to make my own music—no one encouraged it. I had to take the initiative to own my music ability.

“I want to see us educating and empowering ourselves with knowledge and skill sets so that we can be the ones making the changes we wish to see in the world.”

You led the change in the way the world views menstruation. What changes have you seen after the London marathon?

So much—Google released this chart that showed that the words “period” and “menstruation” had been googled 20 times more than the usual rate between 2015 and 2016. The first aim of the marathon was to break the silence and to get people talking. I’ve seen increase access to education, whether its articles in the media, schools talking about it, or doctors providing better health for their patients. Endometriosis was something that was rarely diagnosed until the past 5 years. Many women who experienced deep pain when they had their cycles each month weren’t treated properly for the illness. Now that there’s more information, we have better care for our women and that’s what it’s really about—making sure that every member of your society is taken care of so that we can reach our fullest potential. I’m also seeing policy change—we’ve seen the tampon tax removed across the world. We’re also seeing more healthcare products like pads, tampons, and cups being placed in public places like girl’s high school bathrooms, in the same way that you’d see toilet paper as a public health necessity. It’s also beautiful to see us bringing the trans community into the conversation. The idea is that we don’t want to stigmatize anyone who doesn’t bleed and celebrate the health benefits of those who do. I’m also seeing innovation—so many people regardless of their gender are participating in building better products i.e. organic tampons, period-proof underwear, and reliable applicators that are safe for the most intricate part of our bodies. All of these innovations are empowering women to be business leaders and business thinkers, but also building better solutions for consumers so that the only options available to us are cancer-causing and detrimental to the environment.

What changes do you hope to see in menstrual stigma?

It’s important to make sure the conversation isn’t ageist. We have a deep stigma in our society that when women hit menopause, it’s such a quiet and shameful time. All of these things are just natural parts of the human experience that should be welcomed.

What advice would you give to young women?

Be brave enough to take risks and learn from those mistakes. We value perfection so much in this society, but I wish we valued bravery. If you don’t have the bravery to fail, you won’t unlock the fullest of your potential. I’m really interested in people who are sloppy. You have to make terrible music before you make good music. In our society, we punish women for trying anything—we say it sucks before we even begin. Women upload stuff to youtube and we already tear it down before that person feels brave enough to keep working and make better music. We have to be secure in ourselves to know that we have to make some weird, bad stuff before we unlock the good stuff. And we need to be kind to others as well and create that safe environment for them in the same way that we would want them to do that to us.

What are you most worried about for the future?

I’m most excited about how much young female talent there is and how many young women are understanding the need to challenge the status quo. The internet has allowed that. I’m able to reach young people in a way that I might not have been able to twenty years ago, simply because if I upload something to Instagram, an 11-year-old can find it, and find truth in my message and be inspired to be a better photographer or dancer. It excites me that a lot of us who are trying to make a difference in the world can have an audience that’s so young.

Why is the female voice so important right now?

Because we have to be able to inspire the next generation. I think that women have the chance to heal the earth. We’re in a male-dominated culture where we understand that leadership is based on group-forced dominance and being aggressive in order to achieve success. I want to value collaboration and emotional intelligence instead of competitiveness. The female energy brings a different archetype for leadership to the table which is the very thing that might heal our earth. We value compassion over social hierarchy. That’s why the female voice is important. I also think that women still continue to be valued for our looks instead of our skill set, so us owning our voice inspires others to do the same. Especially for those who are often times unseen and unheard. Women working as maids in hotels often experience sexual abuse, women working in farms in American agriculture often experience abuse but they are off the periphery. They are not in mainstream Hollywood participating in #metoo, but I’d like to believe that they have access to the internet in the same way I do. We need to talk about these issues to combat sexual violence, to celebrate sex positivity, and to celebrate our fullest potential. If others are able to see that message, hopefully, they’ll feel inspired to cultivate that in their own lives.

“The female energy brings a different archetype for leadership to the table, which is the very thing that might heal our earth.”

What’s next for you?

I’m working on my full-length record right now and I’m getting ready for a couple of tour dates, but really my focus right is now staying grounded in LA and producing. In a month, I have a song called “Top Knot Turnup” coming out. It’s about putting your hair up in a bun, getting work done, and combating daily misogyny in your day to day life. In a couple months, I have another song coming out called “Bad Habits” which is about improving yourself so that you can better serve the world.