By Ilana Kaplan for The New York Times

Now Lives: In a 800-square-foot loft in the Arts District in Downtown Los Angeles, with a small stage for performances.

Claim to Fame: Once best known as the drummer for M.I.A., Ms. Gandhi made headlines in 2015 when she ran the London Marathon without a tampon, in a defiant act known as free-bleeding. She has since emerged as an activist and TED Talk speaker, who has fused her passion for music, technology and feminism into a solo music project, which she calls Madame Gandhi. Her five-song EP, “Voices,” which explores feminist values through spoken word, rap and electronica, was released last year.

Big Break: Ms. Gandhi was at the start line of the 2015 London Marathon when she realized she was about to get her period. “With the radicalness in that moment, I connected the dots and chose to bleed freely,” she said. News articles about her decision were widely read. “When I was running, I knew it was a choice of privilege: I knew that there was something radical in doing that. But I also wanted to acknowledge the billions of women and girls in the world who don’t have the same choices that I had in that moment.”

Latest Project: In October, Ms. Gandhi released a remixed version of “Voices,” produced by minority women. The first track, for example, “The Future Is Female,” was remixed by a producer in Los Angeles named Shiva. “This record is a chance to say, ‘Here is a full roster of very talented D.J.s and producers who are women of color,’” Ms. Gandhi said. “‘Book them.’” 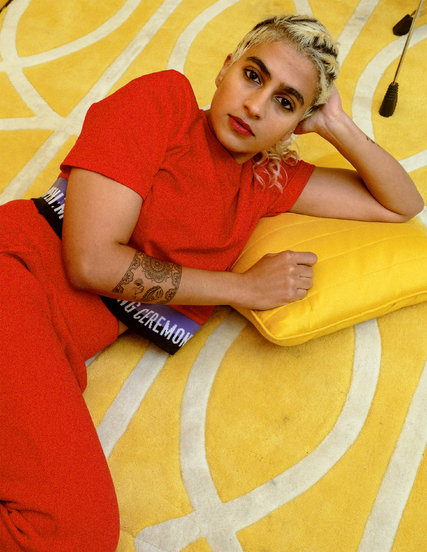 Ms. Gandhi made headlines when she ran the 2015 London Marathon without a tampon, an act known as free-bleeding.CreditMolly Matalon for The New York Times

Next Thing: Ms. Gandhi is touring this season (she recently opened for Ani DiFranco on her Rise Up tour), before she works on her debut full length album next year. “The fact that she put me on tour shows that she’s looking for the next crop of artists who are socially conscious,” Ms. Gandhi said.

Not All Men Are Equal: Ms. Gandhi says she prefers to work with women, finding male energy to be “too domineering.” “I’m always trying to look for other women I want to collaborate with,” she said. “That’s my priority, but I’m trying to think about how much I want to include men.”