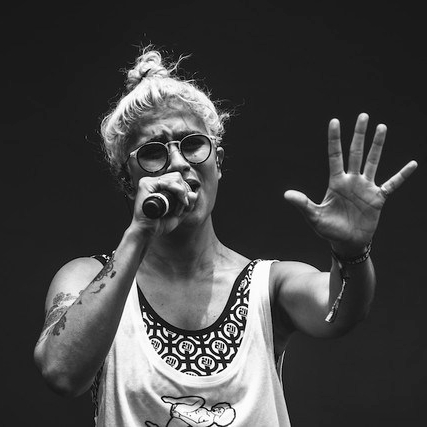 By Isabel S. Dieppa for BUST

The future is female, fierce, and dropped some dope words of truth at the Chicago Pitchfork festival June 14. Who better to kick off the festival this past weekend than singer and writer Madame Gandhi?

No stranger to the Pitchfork music festival, Kiran Gandhi, also known by the stage name Madame Gandhi, first came to Pitchfork in 2013 as the drummer for MIA. 2017 was an even more eventful year for Gandhi being that she was the opener, kicking off the festival with her vision of a feminist utopia.

Fun fact, I too was at her first Pitchfork festival in 2013. I was working as a press and marketing intern for a performance venue at the time. Through the internship I earned a pass to Pitchfork and even had the opportunity to meet M.I.A. I got the chance to catch up with Madame Gandhi at the festival, bringing our relationship full circle.

“I feel really good,” said Gandhi, “We’ve had such a vision for this festival for so many months now, and I really wanted to give it my all. Especially having done the show with M.I.A four years ago, and knowing this was like the Pitchfork homecoming to play on my own project, it was such an honor, I really wanted to do my best job.”

Gandhi may have cut her teeth with M.I.A, but she is a force all her own. Her set is high energy, and very socially conscious. Through her lyrics she elevates and celebrates the female voice. However, it is not just the lyrics, she also practices what she preaches. Gandhi hired an all female crew and band for her tour, and she is opening doors and giving opportunities to women new to the music industry.

“People say you should play with men because it balances out solidarity,” said Gandhi. “Right now my focus is to put as many talented women on the stage as possible, because that visibility has to be there. That solidarity is the very thing that can change people’s perspective that women mistreat each other, or that women are catty to each other.”

Gandhi says be the change feminism is living it, showing it. There is also activism feminism, where she verbally explains these ideas of equality through her music.

“My songs ‘Bad Habits,’ ‘The Future Is Female’ and ‘Her,’ these songs are my electro-feminist songs that speak about my understanding of feminism today,” said Gandhi, “And there is another aspect to it too, that I am also very vulnerable on stage.”

Through her performances she talks about missing her lover, feeling disoriented, and the struggles of living up to the female feminist utopia project, like the times she didn’t own her voice when she wanted to.

It is through her vulnerability and honesty that Gandhi shines. She embraces her inner boss, but it is her humanity that makes her, and her feminism accessible. It is this vulnerability and strength that has resonated with her fans. Fans have expressed their love of her fierceness, and respect the struggles she has been through.

“Anybody who saw Madame Gandhi’s performance has felt the activist spirit at the festival this year,” said concert-goer Ray Dubois.

Through honesty, and vulnerability Gandhi continues to inspire and liberate audiences. She is working to break down the patriarchy and construct a more just female centered world.

“We live in a patriarchy and patriarchy depends on women to tear each other apart in order for it to exist,” said Gandhi, “and that is why I said on the stage today female solidarity is the kryptonite of the patriarchy, because the second we have each other’s back, we take care of each other. We have to realize if we participate in that it’s to our own demise”

After the festivalm Gandhi will continue to tour around the country. Before leaving the festival she shared some advice for other artists who want to do what she does.