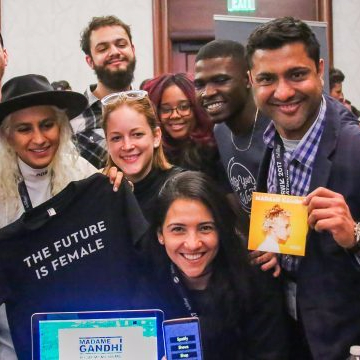 Last week, nine strangers with a passion for innovation teamed up with Madame Gandhi at the SXSW Hackathon to create a brand new app that was then tested and validated at Madame Gandhi concerts by her fans.

The SXSW creative in residence Kiran Gandhi—known by her performance name Madame Gandhi—kicked off the Hackathon with an impassioned speech about the convergence of artistry and technology. Within an hour, the team was working on making her idea a reality.

The app allowed Gandhi’s fans to scan her The Future is Female T-shirt using the newly created EntertainAR app. Once scanned, fans gained access to exclusive content such as 360-degree videos or songs from her album.

EntertainAR’s winning demo entered them into the SXSW Incubator, where the team attended Gandhi’s SXSW concert as her merch team, collected fan data, demoed the prototype, and sold merchandise.

“I loved how the team was able to come up with a minimum viable product over the course of only a couple of hours…they really came to know my brand very well and built-out a product that helped me map my merchandise that I sell at my live shows to my online presence,” said Gandhi.

Trimble, an EntertainAR team member who focused on design and UX said, “I was lucky to be on a talented and creative team that made the 24 hours truly enjoyable. The staff did an excellent job of bringing in industry professionals and artists for participants to collaborate with. Not only was it a productive 24 hours, it was also a ton of fun.”

Praising the team’s ingenuity, mentor Gupta said, “The team of nine channeled their creativity and inspiration to innovate an augmented reality experience for anyone, anywhere, using just their smartphone. We achieved our goal of creating a usable market solution to keep artists in the driver’s seat of their merchandise and fuel their brand through intelligent tech.”

By John Krause
Photos by Randy and Jackie Smith

Check out the full story here