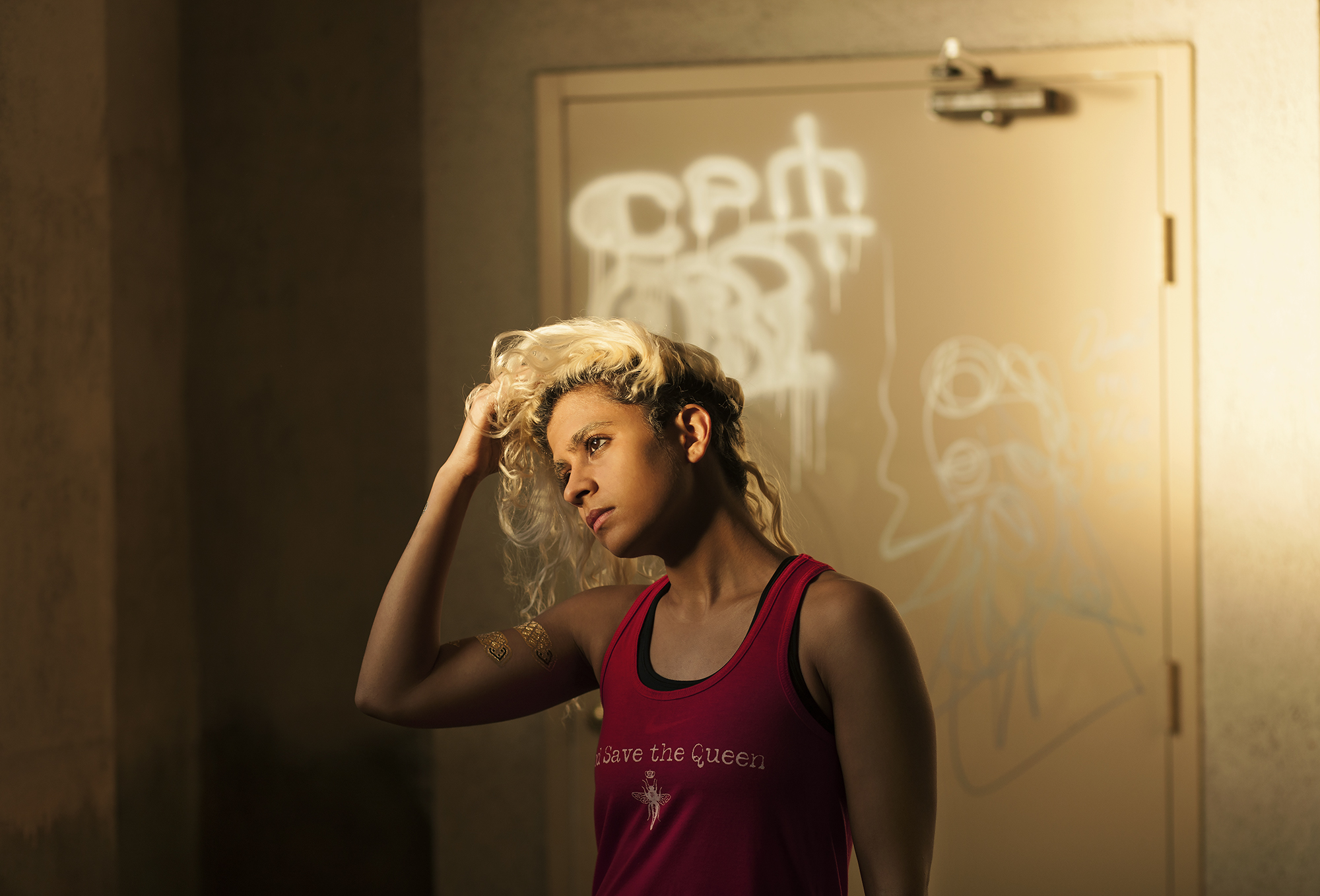 If you ever come to a Madame Gandhi show or listen to my record Voices, you’ll hear one consistent theme: Own Your Voice, Don’t Be Afraid. So on International Women’s Day, let me tell you why I do what I do.

For me, this year’s International Women’s Day is about celebrating the women in our lives and their contributions. It is about gratitude, and knowing the value that women and girls bring to the table, without taking us for granted. It’s the reason why the organizers of the Women’s March are calling for a day without a woman on March 8th, in which women will not take part in the local economy. The idea is to send a signal to the institutions that are constantly threatening the reproductive rights of women and girls, and the companies that are constantly at fault for sexual harassment and for making their work environments psychologically and physically unsafe for women. The signal is to say, if you continue to undervalue us, if our comfort and safety continues to be a low priority for you, we will go elsewhere.

International Women’s Day for me is also about giving women freedom. Freedom to hear ourselves think. Freedom to put your biases away and let us follow our intuition without being made to question ourselves and our capabilities. So much of marketing and media today, even “feminist” media, is constantly telling us what to think, be, do, wear, feel etc. It is oppressive. It is why I intentionally say that my mission is to elevate and celebrate the female voice, elevate and celebrate those voices unheard so that they can say and do whatever the fuck they want. We are not here to be told by others how to be. That in itself devalues our contributions. So on this year’s International Women’s Day, my call to action for everyone, men, women and all genders in between alike, to be mindful of how we inadvertently oppress each other by telling each other how and what to think, and instead to give others, especially women and those whom identify as women, the space to express themselves freely. Then, it is our responsibility to listen to each other.

When I was growing up, I’ll never forget the times in my life where men made me feel small or unseen. I would feel like the most confident person in certain settings, and then completely stupid or useless in other settings where men dominated the space. It felt oppressive. It was often in band settings, where I was the only female musician. I stopped going to those spaces, and eventually I stopped playing with men altogether. Even the most woke men don’t often realize that their very existance can be oppressive because we are all socialized to value a male perspective and less so a female perspective. For us to speak our mind freely, we have to feel very safe and very valued, and at least in my experience, those times are few and far in between.

The same feeling used to happen to me when I was a student at Harvard Business School during group projects. I would start off confident to express my ideas, but over time, the body language of the men in the group would quiet me so quickly, I felt like I was 10 years younger than I actually was. I remember being on a group project in Istanbul Turkey and going to my room and crying after 3 days of feeling like I couldn’t get a word in, and when I did, it was not received or heard. I felt so helpless. I didn’t have the tools to sit a group of 5 men down and say, this feels hurtful. I feel undervalued. Is it because you actually undervalue me or do you not actually realize you are doing it? If it’s the former then I am screwed, and if it’s the latter then I look like I’m melodramatic. It was ironic too, because in the HBS classroom, the constant messaging towards students is that all ideas must be heard in order to collectively, as a business or group of leaders, arrive at the best decision. That in allowing and encouraging all people in the room to participate in the conversation, we will stimulate the most amount of ideas, to then have covered as many outlets as possible, and therefore more thoroughly arrive at a decision.

But in practice, bro/ hyper male culture does not espouse this. It is about male aggression vs. each other, where women become quickly irrelevant. It is toxic. It is toxic not only because it made me quickly self select out of wanting to work in tech or any of these kinds of oppressive places, but it’s also toxic because most of these business have female customers, but by making it difficult to have female employees thrive at the company level, they only hurt their own ability to serve their female customers. Moreover, as a business, if you are quieting the voices that very positively could be contributing meaningful ideas and value to your company, you are crippling your own potential. When we talk about diversity and inclusion, it’s not to check a liberal box, it is to run a stronger business and be a better leader.

So, my mission comes from a very specific and personal place. It comes from experiences over decades where I felt made to feel small and unheard, even when I thought I was one of the most confident women I knew. It comes from a place of not wanting the next generation of girls to ever feel quieted or undervalued. And it comes from a place of knowing and believing wholeheartedly that if we gave girls and women the space to just be, to hear ourselves think, to listen to our intuition instead of letting all the messaging and unconscious biases of the people around us to make us hesitate when we wouldn’t have otherwise, to let us do what we do best and get better at our passions, to let us lead from a place of integrity, interconnectedness and ethos… I think we would make the world a different, and potentially better place. This is the idea of a future that is female.

On this very special day, I focused my efforts on energizing communities who are already very engaged in social justice and feminism, but also took time to share my message with communities of people who may not otherwise be actively engaged in the fight for gender equality, but who might be interested.

2. I partnered with WeTransfer and created a message about International Women’s Day that will play on their wallpaper whenever someone downloads something this week. This was an extraordinary opportunity because that real estate online gets so much traffic, and attracts millions of creators from around the world, but is rarely used for social justice or feminism. To that end, if you go on there, or on to the WeTransfer blog, you will see a 40 video message from me talking about what I do to create space to hear myself think, and why I believe that that is vitally important for all women and girls this International Women’s Day. Photo and video by Deirdre O’Callaghan. (full article here: https://wetransfer.com/thisworks/2017/03/08/wetransfer-studios-x-madame-gandhi-international-womens-day/) 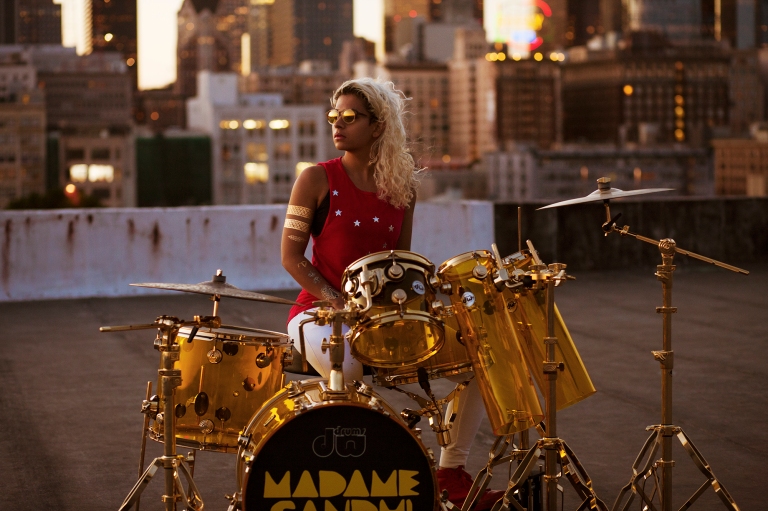