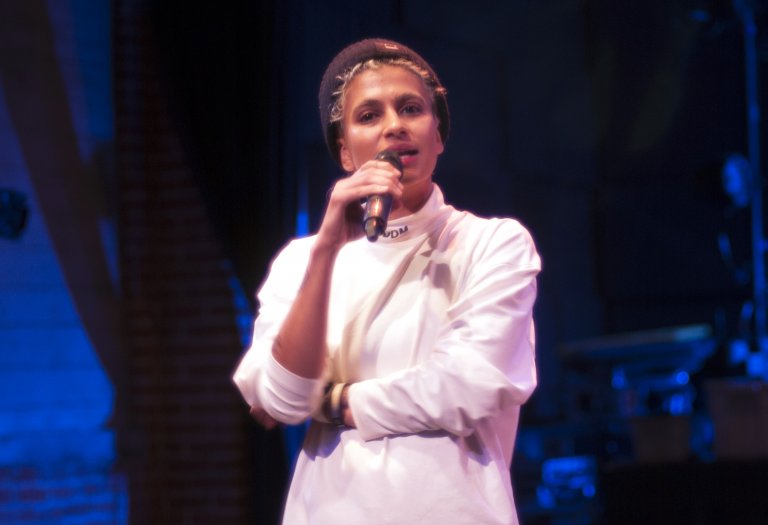 This year at GIRLSCHOOL LA I gave a talk on the 10 best lessons I learned as a woman in music.

10 Best Lessons I’ve Learned as a Woman in Music:

Video and reviews below.

“Madame Gandhi gave a personal and enthusiastic talk about her path from business school to working for Spotify to becoming a drummer for Thievery Corporation and MIA. She had everyone participate in an exercise where we folded a piece of paper into thirds. On one panel we wrote down everything we loved, on the next one we wrote down everything we hate, and on the last one we wrote down solutions to fix the things we hate with the things we love. “Everything I do can be boiled down to feminism, fitness, family and music,” she told us. It inspired me to think more about what is really important to me and to stop saying yes to things that don’t nourish me.” – MADELINE KEYES-LEVIN for Rookie Mag

“I first saw Girlschool speaker Kiran Gandhi (or Madame Gandhi, as she’s better known), at L.A.’s Bootleg Theater a few months back, and suffice to say the girl blew my mind. She was wailing on a drum set, flinging her platinum blonde mane, singing, “The future is female” into the air damn near angelically. I had no idea at the time that the Manhattan-native, whose debut EP, Voices, dropped last last year, was also M.I.A.’s drummer (a gig she scored after emailing the rap icon an incredibly bomb video of herself drumming over tracks like “Mango Pickle Down River”–to which M.I.A. responded “I was speechless”). But Gandhi isn’t just an enormous musical talent, she’s also a brilliant mind (between weekends spent drumming for M.I.A. around the globe, she’s working on an MBA from Harvard and giving Ted Talks on her intuition-centric “Atomic Living” theory), and steadfast philanthropist who seamlessly fuses music, feminism, and activism. We caught up with Kiran in our downtown L.A. studio, to find out about her most memorable #Girlboss moment to date, and here’s what she had to say…” – Remy Ramirez for Nasty Gal