I met the deeply talented singer and songwriter Zoya after a talk on music and business I gave at The Berklee College of Music this spring. She loved Atomic Living, tattooed the concept on her foot, and asked me to play drums and percussion on a track called Lunar Eclipse off her upcoming album. Her work infuses elements of folk, Indian classical music and the effervescent warmth of artists like Ani de Franco. My favorite part about working with her is her poignant ability to bring her musicians up with her and bring out their best work. Here are photos by Jerome Vivino of our session this summer at The Record Co, Boston. Read the Rolling Stone article here. They write:

One among the list of collaborators is drummer and percussionist Kiran Gandhi, who is currently studying at Harvard Business School and has snagged a spot as a touring drummer with Brit-Sri Lankan rapper M.I.A’s group. Mohan met Gandhi at the latter’s drum clinic at Berklee earlier this year. “I showed her my song and we started collaborating on it. We went to the studio here in Boston and we recorded the actual version of drums for that song.” The result is “Lunar Eclipsed,” a track that starts out quiet but builds to a folky rock song with Mohan’s vocals shining through. 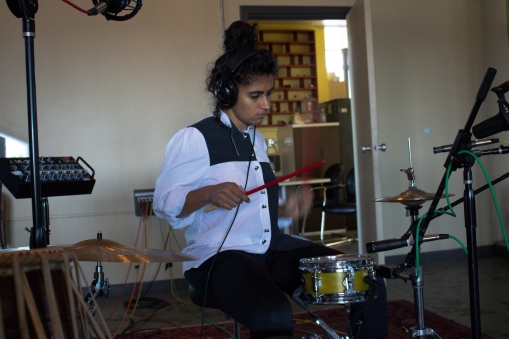 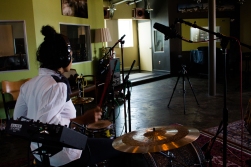 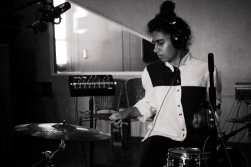 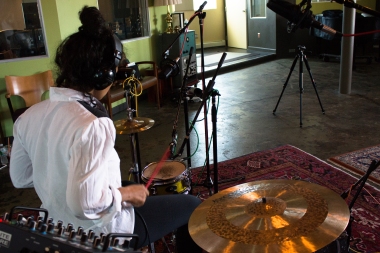 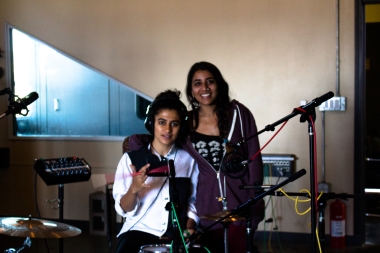 Another interview on Wondering Sound:

You collaborated with drummer Kiran Gandhi on the track “Lunar Eclipsed.” She developed a concept called “Atomic Living,” and I read that you have a tattoo on your foot inspired by her ideas. What, specifically, is Kiran’s philosophy?

Kiran is one of the most amazing woman I have met; she’s so inspiring. When I first met her, she spoke at Berklee about her life as a touring drummer and a music-business entrepreneur, and how she balanced both acts. After the clinic, I felt so drawn to her philosophy of Atomic Living that I asked if we could go get a drink. She explained to me that it’s basically the idea that our world is filled atoms and, just like humans, atoms bounce of each other and create new connections. She said to pick three to six things that are most important to me — my passions or pillars. For me, it was traveling, family, art, learning, things like that. She said that I should always make decisions based on those pillars instead of looking to the future and making decisions based on some job I want to get five years down the line, or making decisions based on what other people are telling me.

She said then there will be no room to regret any decisions and the “atomic moments” that form are so much more true than if I followed a path just to get to Point B. Instead, I should be open to numerous paths that may come out of my “atomic decisions.”

So my tattoo says “step atomically” in Greek (since the Greeks were the ones who first discovered the atom), and that’s why I got it on my foot. So with every step I make in life, I keep her philosophy in mind.

Another interview on India Abroad:

Mohan gravitates towards people who have similar convictions—those who know what their priorities are. And so when British recording artist M.I.A.’s drummer, Kiran Gandhi, came to the Berklee campus one day to host a talk, it was no big surprise that Mohan and Gandhi ended up discussing philosophies at a watering hole in Cambridge a few days later.

“I was super drawn to her; we were both so similar as people,” Mohan said, specifically citing Gandhi’s trademark theory for which she is known: atomic living. The philosophy advises picking three to four fundamental priorities in your life—or pillars—and basing every single decision you make around them. That includes choosing to do things that might seem serendipitous and not necessarily aligned with your daily routine.

If you always follow the decision that aligns with one of your pillars, “there’s no room to really regret anything,” Mohan said.

“For me, the pillars are traveling, learning, art, and family,” Mohan added.

She doesn’t really deem herself a religious person, so the theory of atomic living has provided some desired guidance in her life.

“I realized that everyday, I could live and step atomically,” she said.

“Music is now my religion—every day, I wake up, and I do that. I love it and I learn new things from it, and life lessons are the root of all religions.”