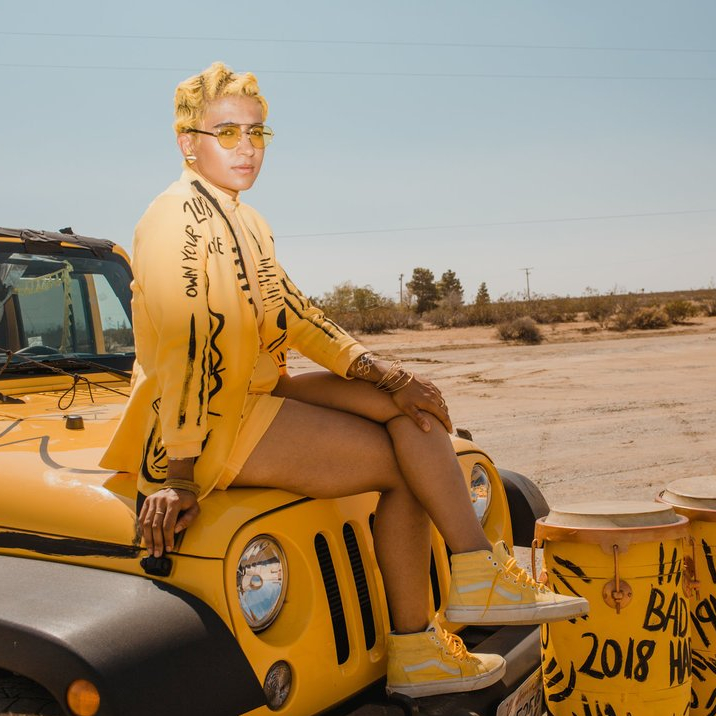 Madame Gandhi Premieres Self-Reflective Video for Percussive Afrobeat Jam “Bad Habits” via OkayAfrica
Directed by Raine Allen-Miller, Video Celebrates Positivity and Liberation as Gandhi leads a group of womxn into rebuilding a brighter, more conscious and collaborative future.
“It’s a socially conscious bop worth every groovy second, and then some, for its empowering message.”
— Paper on “Bad Habits”
“Along with its inspiring message, the beats in ‘Bad Habits’ are irresistible.”
— Brooklyn Vegan
“Madame Gandhi’s New Song ‘Bad Habits’ Will Make You Want To Get Up And Dance — And Then Go Vote”
— Bustle
“Your Fave Activist-Artist” — Nylon
Stream Single on Spotify here
WATCH BAD HABITS HERE

Los Angeles, CA, October 18, 2018 — Exuberant drummer, singer/songwriter, and fourth-wave feminist, Madame Gandhi premieres the celebratory video for her latest single, “Bad Habits” via OkayAfrica. Directed by Raine Allen-Miller, the jubilant clip features Madame Gandhi and an ensemble of multi-faceted, diverse women dancing and re-eductating themsevles in the desert in Gandhi’s signature yellow color.
“The music video for ‘Bad Habits’ explores themes of building the world we want to live in. Reimagining education, self-improvement, collaboration, radical self-reliance and prioritizing joyfulness as way of serving humanity,” Gandhi states. “It was the yellow world of my dreams that I got to bring to life with London-based director Raine Allen-Miller,” explain Gandhi whose first name, Kiran, translates as “ray of light.”
Inspired by Fela Kuti, the joyous, electronic, Afrobeat anthem co-produced by Zach Witness (Erykah Badu’s But You Caint Use My Phone), features infectious rhythms, upbeat harmonies, African-influenced guitar, congas, cowbells, and keyboards that build to a rapturous crescendo. The song beautifully captures the essence of Gandhi’s funky musicianship, inspirational message, and unifying energy which come vividly to life in the video.
Linking womxn’s suffrage, Indian and Nigerian independence, and personal liberation struggles, the song and video highlight how one of the best tools for continuing to fight for freedom is to start by being the best version of yourself. “I hope you watch, share and critique this video, as it was a joy to conceptualize and bring it to life for you to enjoy!” Madame Gandhi exclaims.
She is presently working on a new album, Visions. She is available for interviews and photoshoots now.

About Madame Gandhi
A lifelong activist with a Harvard M.B.A., Madame Gandhi made viral news by running 2015’s London Marathon while free-bleeding to address the stigma associated with menstruation. She has spoken at the White House and the U.N., and delivered a TED talk on “Atomic Living.” Madame Gandhi is on a mission is to celebrate and elevate the female voice through her art and activism.
Recognized this year by Vogue Magazine as one of their “34 Stars Who Continue to Shine on a Global Stage,” Gandhi has toured as the drummer for M.I.A., Thievery Corporation, Krewella, and Kehlani. She has also produced music with ABRA and members of alt-J, Portugal. The Man, and TV on the Radio. Her 2017 debut EP, Voices received praise from several influential outlets including Fader and Paper. Her anthemic single, “The Future is Female” reached #8 on Spotify’s viral charts. Her remix EP for Voices featured reinterpretations by queer femme producers of color whom she admires. In May of 2018, she wowed audiences at forward-thinking music and tech festival, Moogfest. In July, she released another anthem, “Top Knot Turn Up” dedicated to the spirit of getting things done as symbolized by womxn wearing their hair up.
Madame Gandhi recently spoke at Lesbians Who Tech and participated in a visual album with Teen Vogue and Girls Who Code for International Day of the Girl. She will be speaking at Harvard on the 27th and performing at Palm Springs Pride on November 4th.
“It’s quite perfect timing for an artist like Gandhi”
—Forbes
“Kiran Gandhi has never been afraid to make a bold statement.”
—Vogue
“There’s musicians, there’s performers, and then there’s renaissance tour de forces.”
—Spin